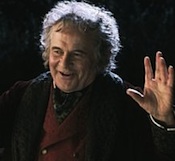 Peter Jackson posted this little tid-bit on his Facebook page:

One comment that came up from the recent video blog was the Bilbo voice at the end—many of you assumed it was Sir Ian Holm. Whilst Ian will be returning as the older Bilbo Baggins in The Hobbit, that recording was actually Martin Freeman’s voice, taken from a script read through we recorded when the cast first arrived. I have to admit, I wasn’t sure who it was when I first heard it, either. Cheers, Peter J

That’s all the information out at the moment, but it appears that Ian Holm will be back in the role as the older Bilbo and of course Martin Freeman will be the younger more featured Bilbo.

This Week in Movies: Episode 2