J.J. Abrams’ reboot of the much loved ‘Star Trek’ franchise is an enormous achievement. Fresh, funny and emotionally involving this space-opera is everything that ‘Star Wars’ fans had hoped the prequels would be…creatively innovative. After a somewhat precarious introduction to the world of feature film on ‘Mission Impossible 3’, director J.J. Abrams work here is far more accomplished and assured, displaying an ease with both intimate human moments and blockbuster sized spectacle. Working from a witty well-crafted screenplay by writers Alex Kurtzman and Roberto Orci, Abrams and company have found a way to incorporate the mythology of previous incarnations, along with some new rather brilliant ideas.

Chris Pine is fantastic in a star-making turn as young cadet James T. Kirk. Equally good is Zachery Quinto, whose interpretation of the Vulcan Spock may rival Leonard Nimoy’s for most calculated use of an eyebrow. All the gang shows up and it’s pleasing to see the clever ways these filmmakers have found to cover well-known back stories and problems. Of all the supporting characters Karl Urban scores as the older, neurotic doctor Bones Mccoy and Zoe Saldana is the sexiest Uhura, ever. Though her relationship with the emotionally perplexed Vulcan isn’t fleshed out here, I’m sure it will be a major plot point in follow-up sequels.

‘Star Trek’ films are similar to the James Bond pictures in the sense that a great villain can infinitely improve the film. Luckily we have Eric Bana here, head-shaved and hidden behind a wall of make-up, however, he is still able to shine through and create a memorable, sympathetic bad-guy. Great character development and awe-inspiring special effects coupled with a rich score by OSCAR winner Michael Giacchino add up to high entertainment in one of the best films of 2009. 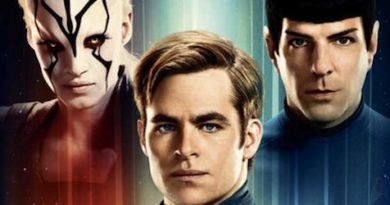 Leave a Reply to Movie Treasures By Brenda Cancel reply