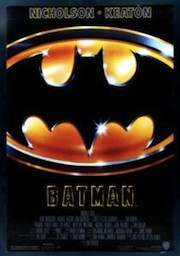 After witnessing his parents brutal murder as a child, millionaire-philanthropist Bruce Wayne (Michael Keaton) pledges his life to fighting crime disguised as Batman. His long-time nemesis, The Joker (Jack Nicholson), has sinister plans for the citizens of Gotham City. His greed is matched by his obsession with photojournalist Vicki Vale (Kim Basinger). But Batman is there to counter the Joker’s every move. With the fate of Gotham and Vicki in the balance, will good or evil prevail? 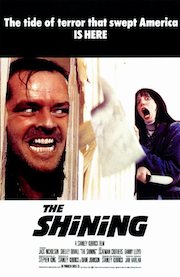 A married couple (Jack Nicholson, Shelley Duvall) with a small son are employed to look after a resort hotel high in the Colorado mountains. As a result they are the sole occupants during the long winter. The hotel manager warns them not to accept the job because of a tragedy that occurred during the winter of 1970. Based on the book by Stephen King. 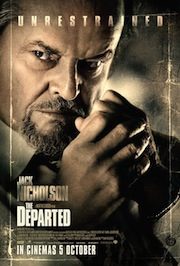 In South Boston, where the state police force is waging war on organized crime, young undercover cop Billy Costigan (Leonardo DiCaprio) is assigned to infiltrate the mob syndicate run by gangland chief Costello (Jack Nicholson). While Billy is quickly gaining Costello’s confidence, Colin Sullivan (Matt Damon), a hardened young criminal who has infiltrated the police department as an informer for the syndicate, is rising to a position of power in the Special Investigation Unit. Each man becomes deeply consumed by his double life, gathering information about the plans and counter-plans of the operations he has penetrated. But when it becomes clear to both the gangsters and the police that there’s a mole in their midst, Billy and Colin are suddenly in danger of being caught and exposed to the enemy – and each must race to uncover the identity of the other man in time to save himself. 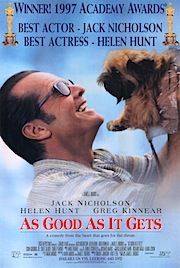 Melvin Udall (Jack Nicholson) is the most dysfunctional of men, an acid-tongued romance novelist who suffers from obsessive-compulsive disorder. As part of Melvin’s unwavering daily routine, he consumes an artery-hardening breakfast of bacon, sausages and eggs at a local cafe. The only waitress willing to stand up to his sarcastic tirades is Carol Connelly (Helen Hunt), a single mother struggling to raise her chronically asthmatic son. Simon Nye (Greg Kinnear) has the distinct misfortune of living across the hall from Melvin. A talented artist, Simon is the darling of New York’s art world, reason enough to draw Melvin’s verbal fire. These three, none of whom has a chance in hell of finding real happiness, discover their fates intertwined because of a fourth character: an ugly little dog named Verdall. 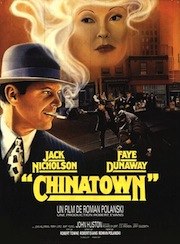 Get these Best of Jack Nicholson Movies from Amazon.com