There was a brief moment in the mid 1990s when Christian Slater was being sold as (possibly) the next action star. Certainly in the wake of Keanu Reeves career making a turn in Speed and with action vets Schwarzenegger, Stallone, Seagal and Van Damme in career free fall studio heads began the search for an apt replacement. During this period we were treated to the goofy screen charms of Howie Long in Firestorm and Christian Slater in Hard Rain. To be fair Slater was a mini sensation after the surprising box office performance of 1996s Broken Arrow.

Hard Rain was written by Graham Yost who penned the infinitely superior action thriller Speed. I have a sneaking suspicion once that film crossed $100 million dollars in ticket sales this script came out of the bottom drawer. Who can blame the guy? It’s a fun premise with another gimmick to up the ante on an otherwise stand genre formula. Admittedly a rising flood is no match to a bus that can’t drop below 50 mph but like I said this isn’t top drawer material. Perhaps the biggest oddity in the entire picture is the presence of Morgan Freeman as the lead villain. The advertising materials do an adequate job of dissecting the simple plot; “In the worst storm in living memory, one guard stands between five men and three million dollars”. Slater is the armored car employee running from Freeman and his band of robbers.

This adventure tale was directed by Mikael Salomon a former cinematographer who photographed James Cameron’s underwater epic The Abyss. I guess Salomon really enjoys shooting in large bodies of water. His collaboration with Cameron is presumably the reason this picture doesn’t get bogged down and waterlogged. The only grip I have with Salomon is his casting choice of Minnie Driver (another mid 90s mini-sensation), her horrendous midwest accent is laughable throughout. I would bet that after Good Will Hunting was met with critical and commercial acclaim Driver was thrust upon the director by Paramount brass.

It’s difficult to defend a film like this. You know from the title if this is your kind of flick. Hard Rain is a well-crafted film that closely follows the conventions of the action and disaster genres. The outcome is never in question and the story is utterly predictable from the outset. However fans of this type of movie will appreciate the modest pleasures throughout. 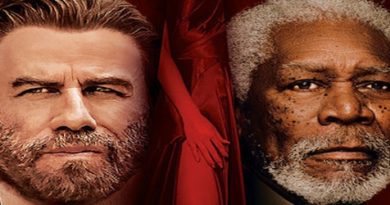