Deadline.com is reporting that the Academy has officially banned comedian Sacha Baron Cohen from attending the Oscars this year. They pulled his tickets after learning of his plans to walk the red carpet in full character get-up from his new film The Dictator. Then, after the walk he would have changed into a normal tuxedo and go about the rest of the proceedings without making a stir. It may seem fine to most, but the Academy has often barred any type of movie advertisements from the Oscars in the past. It’s only this year that they are allowing actual commercials for films during the telecast.

In 2007 there were plans for Cohen to present an award, but the Academy refused after he insisted on doing it as Borat. Then there was an upset over South Park creators Matt Stone and Trey Parker showing up in drag in 2000. The Oscars are the prestigious awards show and I have to agree with the Academy over trying to keep this sort of stuff out of the ceremonies, but I feel like the red carpet should be more open. This isn’t the MTV Movie Awards in which Cohen flew down and landed ass first in Eminem’s face, and he seems to understand that.

We already have The Globes which pokes fun at the drunken celebrities in attendance, MTV Movie Awards for the teens-twenty-somethings and People’s Choice Awards for everyone else. Hell there’s even Nickelodeon’s Kid’s Choice Awards for the younger crowd. If we lose the polish and prestige from the Oscars how will we know what the best movies that nobody watched are? In all honesty the most important thing the Academy needs to figure out is how to get more popular movies in the nominees, and the only way that will happen is to welcome in a newer crowd to the fold. The types of nominees won’t change as long as the voters are primarily old white dudes. You can’t expect that group to represent the diversity of American audiences across the country. Which is why you can’t expect to see Sacha Baron Cohen in attendance, even though he’s in Hugo which is up for 11 awards. Considering the way he wanted to stage this I think it should be allowed. The red carpet isn’t really the awards ceremony, which he was planning to be respectable during.

What do you think, should the Academy relax a little on this type of stuff? Should Cohen have been allowed to proceed as planned? 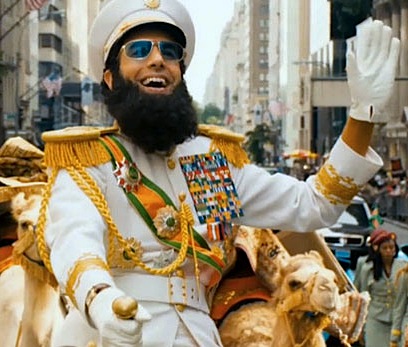 Sacha Baron Cohen in The Dictator