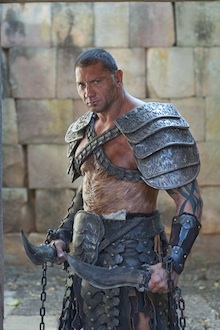 Looks like Vin Diesel hasn’t gotten enough of sharing the screen with pro wrestling’s biggest stars. Last summer Diesel faced off against Dwayne ‘The Rock’ Johnson in Fast Five and now fellow mesomorph Dave Bautista has been enlisted to (presumably) play a villain in the still Untitled Riddick Sequel. Bautista has shown a real flair for acting and he has a big screen presence. If you haven’t seen his work check out the evocative and underrated House of the Rising Sun. This recent announcement is another in a string of recent casting news that included high profile additions such as Jordi Molla, Katee Sackhoff and Karl Urban. The film is in production at the moment in Montreal with returning director David Twohy at the helm again. Full synopsis below…
“
“Betrayed by his own kind and left for dead on a desolate planet, Riddick fights for survival against alien predators and becomes more powerful and dangerous than ever before. Soon bounty hunters from throughout the galaxy descend on Riddick only to find themselves pawns in his greater scheme for revenge. With his enemies right where he wants them, Riddick unleashes a vicious attack of vengeance before returning to his home planet of Furya to save it from destruction”.