This is my list of my top five favorite Pixar animated movies. This is perhaps the most difficult list I’ve ever put together. Mainly because, with the exception of Cars 2, there isn’t a bad Pixar flick out there. Check out the list of contenders – Toy Story, Toy Story 3, UP, A Bug’s Life, Ratatouille, Cars, and Brave. I can only imagine that this list will continue to grow and that only a few additions won’t make me double check my top five Pixar movies list. 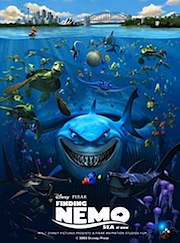 Nemo, a boy clownfish, is stolen from his home in the Great Barrier Reef and winds up in an aquarium in a dentist’s office. His timid father Marlin must embark on a dangerous trek to rescue his son, who has daring plans of his own to return safely home. 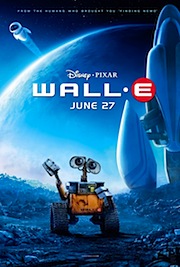 After hundreds of lonely years of doing what he was built for — cleaning up the planet — WALL·E (Waste Allocation Load Lifter Earth-Class) discovers a new purpose in life (besides collecting knick-knacks) when he encounters a sleek search robot named EVE. EVE comes to realize that WALL·E has inadvertently stumbled upon the key to the planet’s future and races back to space to report her findings to the humans who have been eagerly waiting aboard the luxury spaceship Axiom for news that it is safe to return home. Meanwhile, WALL·E chases EVE across the galaxy and sets into motion one of the most incredible comedy adventures ever brought to the big screen. Joining WALL·E on his fantastic journey across the universe 800 years into the future is a hilarious cast of characters, including a pet cockroach and a heroic team of malfunctioning misfit robots. 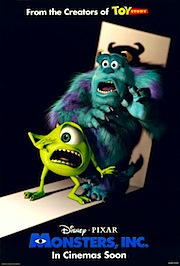 Monsters, Inc. is a factory which sends monsters around the world to scare kids who are trying to sleep. It’s nothing personal, in fact the screams are used to power Monstropolis where the monsters live. This job isn’t easy for the monsters, who believe children are toxic. James P. Sullivan (Goodman), a large woolly blue monster, is one of the company’s top scarers. Teamed up with a troublesome green one-eyed monster named Mike Wazowski (Crystal), the two roommates and best friends are finding that today’s kids are not as easily scared as they used to be. One night Sulley accidentally lets a young girl named Boo into the monster world. Now Sulley and Mike must risk their own safety as they race to get Boo back into the human world without letting anyone know of her existence. 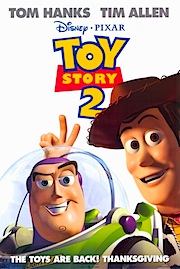 The toys face a new crisis as Andy goes to summer camp. An obsessive toy collector (Wayne Night) snatches Woody (Tom Hanks) who turns out to be a highly valued collectable — it seems that Woody was the star of a 1950s television show. It is now up to Buzz Lightyear (Tim Allen) to rally up the rest of the gang (Mr. Potato Head, Rex, Hamm and Slinky Dog) and spring into action to rescue their pal from becoming a museum piece, all before Andy gets home and finds Woody missing. 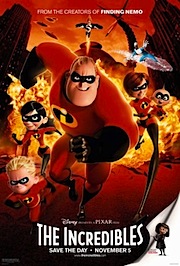 Bob Paar used to be one of the world’s greatest superheroes (known to all as “Mr. Incredible”), saving lives and fighting evil on a daily basis. But now, 15 years later, Bob and his wife (a famous former superhero in her own right) have adopted civilian identities and retreated to the suburbs to live normal lives with their three kids. Now he’s a clock-punching insurance claims adjuster fighting boredom and a bulging waistline. Itching to get back into action, Bob gets his chance when a mysterious communication summons him to a remote island for a top secret assignment.

Beauty and the Beast, Finding Nemo, Monsters Inc and The Little Mermaid Get a Retrofit 3D Release from Disney