This is my list of my top five best Chuck Norris movies. Norris has been a proven draw at the box office since the early 80s and continues to be one of the few action stars that has been both a movie star and headlined a highly rated television series. Lately Norris’ name has been mentioned in reference to his upcoming appearance in The Expendables 2. As this list proves Norris was at his peak in working in the 1980s, his prolificness working with Cannon films resulted in an average of two films a year. While he never attained the level of stardom as his contemporaries Stallone and Schwarzenegger, Norris as been hailed as one of the pioneers in the martial arts community. In recent years a internet phenomenon has begun in which artificial ‘facts’ are generated about the venerable action icon. 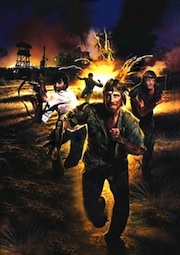 Released a few months before Rambo-mania swept over the country during the summer of 1985. This sequel is actually a prequel, detailing the events that occurred to Norris and fellow soldiers at a POW camp. This rah-rah patriotic film is just the right mixture of camp, vicious bad-guys and martial arts mayhem to entertain even the most causal Norris fan. A bit of trivia: this was actually intended to be the first in the series, however Cannon films decided to release and re-titled the second part Missing in Action. Hence the beginning sub-title on this installment, resulting a supremely entertaining 1980s relic.

Ten years before freeing American POWs from a brutal General, Colonel James Braddock (Chuck Norris) was held in a North Vietnamese POW camp run by sadistic Colonel Yin (Soon-Teck Oh), who forces the POWs to grow opium for a French drug runner named Francois (Pierre Issot), and tries to get Braddock to admit to and sign a long list of war crimes. During his team’s time in captivity, they are relentlessly subjected to various forms of humiliating torture, and Braddock being told that his wife has left him and has remarried. One of Braddock’s comrades start to suffer from malaria, and is injected with what they are told to be antibiotics. They later find out that he was in fact injected with a lethal dose of opium instead. Braddock must escape and rescue his fellow prisoners from Yin. 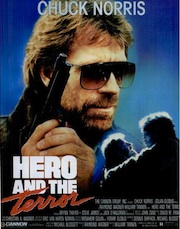 Hero and the Terror was Chuck Norris’s first major attempt at diversifying form his traditional martial arts roles.This underrated gem in the Norris cannon is over looked far too often by even the most dedicated admirers. Pairing Norris against hulking presence Jack O’Halloran along with the great Steve James is Cannon Films heaven. Director William Tannen does an effective job mixing in action, romance, and horror elements in this genre bending cop film. Also Norris looks his biggest physically in this role, maybe those Stallone/Schwarzenegger hits were giving him motivation. Whatever may be the case, there is no denying this is one of Norris’s best.

Norris stars as heroic Los Angles detective who subdues a vicious serial killer. There is a slight twist for the karate champ in this cop action thriller. He shows his emotional side when he is faced with the prospect of fatherhood as his girlfriend bears their child. Despite such newfound domesticity, Norris still manages to add the usual quota of kicks and punches. The climatic showdown takes place inside a large movie theater where the psychopath (Jack O’Halloran) has stored his victims’ corpse. The film has an erie score and a low-key atmospheric setting that recalls elements of Phantom of the Opera. 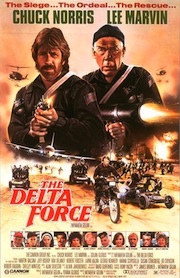 Released in the mid-1980s when renewed patriotism was washing over the nation, this escapist fantasy was the Hollywood answer for the real-life airliner hijackings that were taking place at the time. Obviously this type of takes on another dimension in the wake of post 9/11 sentiments. Viewed in a reflective time capsule it is still an engaging action thriller with a parade of famous faces, not unlike the 1970s disaster movies. This would be the first and last time that Norris would star in a film that outgrossed a Schwarzenegger vehicle.

A group of Lebanese terrorists hijack American Travel-ways Boeing 707 (ATW) Flight 282 that is on a flight from Cairo to New York City. Taking all passengers and crew hostage, the group, New World Revolutionary Organization, led by Abdul Rifi (Robert Forster) and Mustafa (David Menachem), forces Captain Roger Campbell (Bo Svenson) and his crew to fly the plane to Beirut, Lebanon, where they make demands to the United States government that, if not met, will result in the death of the hostages. During the crisis, they separate the Israeli passengers from the Americans by forcing the flight attendant to identify them, who is hesitant to do so because she is German. When the plane lands in Algiers for refueling, the terrorists bring a dozen additional henchmen on board. Meanwhile Delta Force, led by Colonel Nick Alexander (Lee Marvin) and McCoy, are deployed to resolve the crisis. Delta Force assaults the terrorist holdout, freeing the hostages and evacuating them to the airport. During the battle, McCoy, engages the enemy with a vicious hand-to-hand fight, breaking Abdul’s arm. As the terrorist leader prepares to shoot McCoy, he is killed after McCoy launches a rocket into his car. With the hostages and rescue teams secured, the team seizes Flight 282, taking off just as McCoy is the last one to board the plane after having destroyed several terrorist jeeps on the runway with his motorcycle armament. The team ends their operation and departs for the United States amidst celebrations by the people and a rousing rendition of “America The Beautiful” 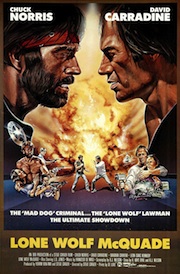 Lone Wolf McQuade has the feel of a Sergio Leone western seen through the eyes of Walter Hill. In fact this film share more than a passing resemblance to Hill’s 1987 film Extreme Prejudice. Norris fulfills the usual number of fights and karate kicks, but this movie also contains the single most iconic sequence in all of the Norris film cannon. After being buried alive in his super-charged pick-up, he four-wheels out of his dirt grave, pops a can of beer and pours in on himself. If that is not great cinema, then I don’t know what is.

Norris’ first portrayal of a no-nonsense Texas Ranger is a great fit for the diminutive martial arts champ. Macho action explodes all over the screen, as Norris confronts his enemies with an array of assorted weaponry. There is an abundance of mayhem, and the face-off between Chuck and David Carradine is mounted well. The plot is the standard revenge thriller mixed with a touch of spaghetti westerns. As if Norris was taking a page out of Eastwood’s playbook, he is a character of action and few words. The well paced direction from Steve Carver and the memorable score are great assets to this crispy edited action flick. 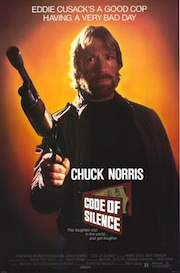 Code of Silence was long rumored to have been a potential vehicle for Eastwood’s Dirty Harry series. When the star turned it down old Chuck picked it up and along with skilled director Andrew Davis produced the best movie of his entire career. Norris plays a Chicago cop with the right swagger and the film, while slightly dated now, was a big it for Chuck in a year that saw three film released featuring the bearded beast of beat-downs.

Norris as a Chicago police sergeant and one-man army, mops up a powerful Columbian drug ring. The blaze of violence is exceptionally well-handled and bloodthirsty, with an unusually high body count. As per the norm, Norris displays his impressive fighting abilities, but the real thrust here is on elaborate stunt sequences and car chases. This picture was thought to be the vehicle that would propel Norris into the ranks of Eastwood and Bronson territory, unfortunately it would turn out to be the high water mark on a career that has lasted for nearly 45 years.