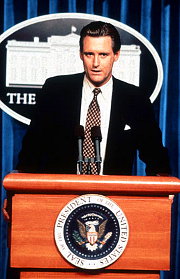 Before playing a fake president in NBC’s new comedy 1600 Penn., Bill Pullman was the fake President Thomas Whitmore in Independence Day. In a recent interview with Crave Online Pullman has said that plans are being made to put this through with or without star Will Smith.
“
The Will Smith part of it may be ongoing, but I think there’s strategies for both. I like what I have to do in both of them. I’m not in an old age home in a wheelchair being wheeled out for one more moment. It’s a very interesting conception of what happens to Whitmore between then and when it picks back up.

Sounds like Whitemore’s alien fighting days aren’t over yet. As for Smith, I hope he returns, this is the movie that cemented him as a Hollywood star and proved that he could open big blockbusters. Earlier Fox pulled the 3D retrofit for Independence Day from its theatrical release schedule, something that happened with another Will Smith starrer I, Robot. We did at least get that as a 3D Blu-ray release, and I’m still hopeful that Independence Day still gets a 3D Blu-ray release, it’s one of the few 3D retrofits I was excited about, especially with the awesome July 4th slated release.

Anyone excited about the possibility of ID2?