Superman IV: The Quest for Peace, holds a special place in my film-going memory. It was the first Superman film I saw in theaters. When those iconic title cards and equally iconic theme music soared over the speakers, it was a transporting experience for an 8-year-old boy. That this cheaply produced sequel was crafted by B-movie studio Cannon and (only) distributed under the Warner Bros. banner, explains a great deal. This is admittedly the ‘thinnest’ of the series, barley stretching 90 minutes in length with an overly simplified plot.

Continuing the downward spiral of the franchise begun with Superman III, this installment is marginally better than the last. But, both are a far-cry from the groundbreaking first two films in the series. This time out, Superman heeds the plea of a schoolboy to disarm the world’s national super-powers of nuclear arms. The cold war setting and (at the time) current theme of protest against the use of nuclear weapons is a good jumping off point for a Superman movie. However, Superman IV cheats by useing this plot device as an excuse for Superman to gather a collection of nuclear missiles in orbit, heaving them deep into the cosmos. The resulting blast energizes a new super-villain, Nuclear Man. A scientifically engineered being, developed by Lex Luthor from a strand of Superman’s DNA.

Meanwhile back in Metropolis, The Daily Planet has been bought out by a wall-street shark, who intends to turn the venerable newspaper into a tabloid rag. The tycoon’s daughter, Lacy (Mariel Hemingway) develops a small crush on the impish Clark Kent. Setting up a few amusing bits in which the attractive woman, tries to seduce Clark, who is oblivious to her attempts at romance. Concurrently, Kal-El must face the awesome strength and destructive power of Nuclear Man.

The lack in quality and a strain to keep the story moving, shines through from the opening scenes. Christopher Reeve is still great in the role, but even he looks bored at this point. Think of Roger Moore in A View to a Kill, and you get what I’m saying. Gene Hackman’s reappearance in the series is a nod from the producers that we are to act as if the last sequel never occurred. He is barely in the film and his side-kick has been replaced with a younger, hipper version in Lenny (Jon Cryer). Superman IV: The Quest for Peace is another cinematic example of the enormous difficulty that lies in making a credible superhero flick. 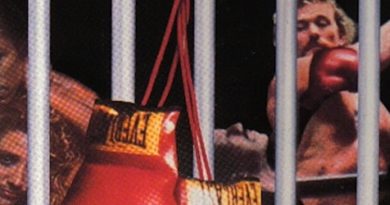