Ride Along has proven to be Kevin Hart’s star-making vehicle, and that’s appropriate since the movie wouldn’t work without the popular comedian’s laughable antics. This is the comedic side of Training Day, something the film itself comments on a number of times, Ben Barber (Hart) is in love with the sister of rogue detective James Payton (Ice Cube). In an attempt to prove himself a rightful candidate to the police academy and a worthy partner to James’ sister, Ben convinces James to allow him on a one-day ride along.

During the course of the day, Ben will be exposed to various dangerous situations while James secretly hopes to derail the newbie’s enthusiasm and crush his dreams of becoming an officer. The most successful bit in the picture is a hilarious trip to the gun range, where the diminutive Ben tries to handles weapons that he has only seen in movies and video games. It ends with one of the funniest sight gags in recent memory. For all the predictable elements in Ride Along, the least predictable is the motor-mouthed Hart, who single-handedly gives this movie a purpose for existence.

Kevin Hart is the most promising star in comedies today, he is poised to take over the Chris Rock/Martin Lawrence mantel and if he doesn’t wear out his welcome with the same shtick, then he has a legitimate shot at holding the box office power of Eddie Murphy in the 1980s. Witness the last sequence in which Hart poses as the reclusive cartel boss Omar, in lesser comedian’s hands this scene is a bore, with Hart’s scared tough-guy persona it is among the film’s many funny moments. Ride Along is an early year surprise and most likely the beginning of a new franchise. 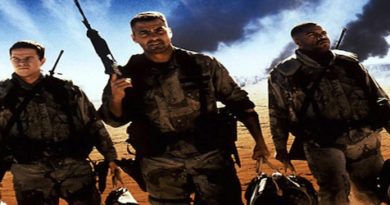