The Purge: Anarchy is a spooky follow-up to the surprise hit of summer 2013. This time out the story is broader, darker, and deeper. The film is an intense nightmarish vision of surviving one-night in a society gone mad. Beautifully shot and crisply edited, this sequel bests the original in terms of story, production values and acting. Through plot development, sound design, costumes, and dialogue a remarkable amount of dread is summoned and sustained throughout the brief running time.

The story is set nine years in the future, on the day of the Annual Purge. The horrific yearly tribute lasts from dusk to dawn, and all manner of crime is permitted by the government. The media credits the Purge for record low unemployment and poverty levels, while an anti-Purge resistance disputes the claim and argues that the Purge is a way to get rid of the poor and minorities. The screenplay offers three different sets of characters and story-lines; Eva Sanchez (Carmen Ejogo), is a waitress rushing home to care for her sickly father and younger sister. Shane (Zach Gilford) and Liz (Michelle K. Williams) are a middle-class married couple preparing to announce their separation to friends and family, until their car breaks down stranding them in downtown as the Purge commences. The last character is the most interest, former police sergeant turned vigilante Leo Barnes (Frank Grillo), goes out hunting for the man who killed his son while driving under the influence of alcohol.

The characters all converge and Barnes becomes a sort of savior figure for the group. He is heavily armed and skilled at combat, but the roving gangs of masked hoodlums, rich opportunists and homicidal maniacs is a constant threat. A great portion of the film is spent evading capture, being caught, escaping, find reprieve only to be back in danger. All is done with remarkable style and efficiency, this is a lean and smart movie with enough violence and jumps to satisfy the bloodlust crowd, while giving thinking audience member a bit to chew on. Credit must be given to writer/director James DeMonaco for not resting on his heels and coasting, he has taken the story outside and amped up the intensity.

The Purge: Anarchy is like Paul Verhoeven and John Carpenter collided to produce a low-key thriller with ideas, intensity, and relatable characters with plausible real-world motivations. Frank Grillo, memorable in Warrior, is an outright action-hero. His dark features and dour demeanor suggest he would make a great Frank Castle/The Punisher if Marvel wanted to reboot that character. The supporting cast is equally well-chosen based on audience demographic needs. The true star of The Purge series is the inventive concept itself, the notion that society has gone mad for 12 hours and everyone is a potential enemy lends itself to future sequels with many different story possibilities. There has been rumblings of an Escape from New York remake for quite a while now, James DeMonaco’s use of city landscapes and foreboding nightfall lines him up well with that project if it ever finally comes to fruition. Do you know who would make a great Plissken? Yep. Frank Grillo. 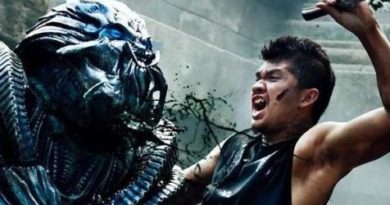