Burt Reynolds charms his way through his most iconic role in the 1977 mega-hit (selling an estimated 56 million admissions), Smokey and the Bandit. In the nearly 40 years since its theatrical release, the movie is undeniably dated, but still a ton of no-brainer fun. Good ol’ boys Bandit (Reynolds) and his pal Cledus (Jerry Reed) attempt to bootleg 400 cases of beer from Texas to Georgia under the noses of the state cops. To comment once again on the dated culture of the film, in 1977 Coors beer was illegal east of Texas. Let that sink in.

The Millennium Falcon may have been the fastest thing in outer space during the summer of ’77 but, Reynolds’s black Pontiac Trans-Am was with question the most popular vehicle on Earth due to this film. Bandit’s plan is to drive ahead of the loaded trucker, hoping to gain the attention of lawmen and diverting the fact that contraband is in tow behind. The pair are put up to the task by a sibling duo known as Big and Little Enos, who dress like Texas oil ranchers circa 1970’s polyester suits.

The immensely likable screen-team of Burt Reynolds and Jerry Reed are joined by the admittedly hilarious antics of Jackie Gleason’s bumbling Sheriff Buford T. Justice. The television star turns in an equally iconic comedic performance as a stereotypical southern sheriff in hot pursuit, who mutters ‘sum-a-bitch’ in nearly every sentence. Along the way Bandit encounters a runaway bride (Sally Field) who joins him for the adventure.

Fast cars and several 18 wheeler trucks are the true co-stars of this road-comedy, laced with CB jargon , drawn-out chases, and big crash stunts. The movie glides on the charisma of stars Reynolds, Fields, Reed and Gleason. The light comedy is well handled and the editing is tightly wound for maximum amusement. Director Hal Needham was a former stuntman and his talent in that arena is evident in the copious amounts of top-notch stunt work in this picture. The first of several pairings between Needham and Reynolds, and the beginning of the ‘car pictures’ sub-genre. 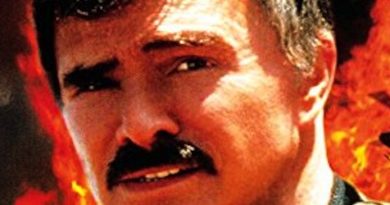