The sheer charisma of the cast nearly offsets the banality of the plotting in We Are Your Friends. Obviously inspired by Trainspotting (visually), Boogie Nights (storyline), and Saturday Night Fever (introducing a musical phenomenon to the masses)–the energy level is kept high and the film doesn’t over stay its welcome, but the predictability of the script makes this one feel like it’ stuck on repeat. First-time feature Director Max Joseph shows promise with a clear understanding of visual language, smart editing choices, and interesting artistic flourishes.

Cole Carter (Zac Efron) is a 23-year-old kid kicking around in San Fernando Valley. He may be orphaned, the screenplay never takes the time to clarify this, and lives in the pool house of his best friend’s parents’ home. Cole spends his time hanging with his buddies, consuming drugs, chasing pussy, and occasionally making ‘beats’. He often speaks about becoming a big-time DJ, but shows little fortitude in making it into a reality.

A fortuitous opportunity presents itself when Cole meets world-famous DJ James Reed (Wes Bentley), who takes a liking to the kid and decides he is protegé material. The two begin working on the one song that will change people’s lives. Complications arise when Cole falls for Reed’s girlfriend (Emily Ratajkowski). A drug-fueled indiscretion threats to jeopardize Cole’s relation with Reed and the future he has lusted for.

Slick visuals, great-looking leads, a solid performance from Wes Bentley, and an admittedly vibrant soundtrack nearly distract from the sense of deja vu that hangs over the story. We Are Your Friends is better than the sum of its lackluster plot elements, but it’s not the generation defining film it so desperately wants to be. 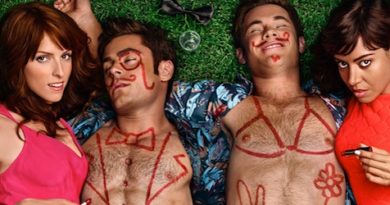