American critics and audiences were indifferent to 1997s Double Team. To most that most remarkable attribute of the film is that it represented the feature film debut of Dennis Rodman, who led an atrocious spin-off film a year later. Those folks are over-looking the strange, wonderful and occasionally beautiful film that was also the american debut for Hong Kong action maestro Tsui Hark. Perhaps American audiences weren’t accustomed to the nonsensical, mystical stylings of Hark’s works. Unlike John Woo’s collaboration with Van Damme in Hard Target, which was a watered-down version of the Woo style, Double Team is full-tilt Hark. I think the picture works better today than when it premiered in theaters two decades ago.

The nation’s top counter-terrorist, Jack Quinn (Jean-Claude Van Damme) wants out of the agency. But on the eve of his final mission, a moment hesitation causes him to miss his target — the dangerous, enigmatic terrorist Stavros (Mickey Rourke). Quinn wakes up in the Colony, a think tank for spies who are too dangerous to roam the world, but too valuable to be killed.

Now, Quinn’s wife and unborn son have become the target of Stavros’s lethal vengeance and there’s only one man who can help put Quinn on the path to his family. The flamboyant weapons dealer Yaz (Dennis Rodman) is Quinn’s last best hope at taking down Stavros.

The highlight of the picture is a hotel room battle sequence. Van Damme takes on an assassin who holds a switch blade in his toes and kicks feverishly at the hero. The choreography, editing, and staging of the scene truly embodies the effect Hark was able to achieve in his Hong Kong work. The presence of NBA star Dennis Rodman is an excuse to include a number of cringe-worthy basketball puns, but he’s not as stiff on-screen as Shaq.

Double Team was filmed and released in the worst part of Van Damme’s drug addiction stage. He looks thinner, tired, and aged in a way that was startling to me as a fan when I first saw the film. The liability to the film was supposed to be Rodman’s eccentric behavior, but producers have revealed it was Jean-Claude who was the difficult diva. The final product fairly rests in the over-looked and under-rated category. It’s worth a second view after all these years. 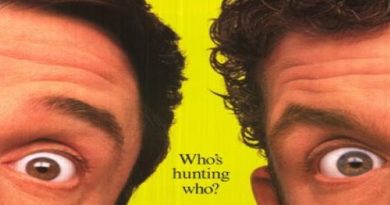