Looking back at The Wedding Singer retroactively from a two-decade perspective, it becomes clear that this film would set the template for the rest of Sandler’s film career. It’s a saccharine sweet romantic comedy with a rudimentary plot, a cheerful 1980’s soundtrack, and some non-offensive humor. These traits would come to define the typical Adam Sandler comedy henceforth. Over the course of the following twenty years, Sandler and co-star Drew Barrymore would share the screen two more times making The Wedding Singer the first in the pair’s unofficial trilogy of romantic comedies.

Robbie Hart (Adam Sandler) is a former rock-star turned wedding singer. He’s engaged and is to be married but when his fiance doesn’t show up he’s left despondent and purposefully destroy’s other people’s weddings. That’s until he meets Julia (Drew Barrymore), a waitress at one of the events Robbie gets kicked out of, she’s planning her own wedding and asks Robbie for his help. The two bond over the course of wedding planning and eventually Julia starts to fall in love with Robbie, aided by the oafish behavior of her fiance Glenn (Matthew Glave).

This is the film that launched Sandler into super-stardom. After this, he would be considered an A-list talent on a roster that included names like Jim Carrey, Eddie Murphy, and Bill Murray. The uber-machoism of Adam Sandler’s previous films would be virtually forgotten in favor of this new-found screen personality, one that made him and his films more palatable to female and older audience members. The Wedding Singer is a fairly innocuous comedy, but its easy-going tone is both an asset and a would be a later hindrance to its star’s future filmography to some extent. 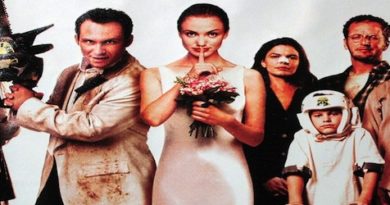