Red, or retired and extremely dangerous, is not the geezer pleaser it looks to be. In fact, with all the comedy, explosions and action I’d say it’s fun for all ages. Bruce Willis plays a retired CIA operative, who along with fellow retiree’s Morgan Freeman, John Malkovich and Helen Mirren, are being hunted down to cover up a past mission. Mary-Louise Parker is Willis’ “girlfriend” who he takes captive in order to protect her life.

These four, along with Brian Cox, turn out to be quite the bad asses. Bruce Willis plays this character slightly colder than a John McClane, but not any less likable. In one scene he steps out of a spinning car, which barely misses his legs, and begins shooting up his pursuer without the slightest hesitation or worry. Only Willis could pull this scene off, which made me laugh out loud in a good way. In this sense Robert Schwentke’s direction is right on the money, mixing a fair blend of action and comedy to create an incredibly enjoyable film.

Helen Mirren turns a one eighty from her role in The Queen to a role as a sniper with no mercy. She even shot the love of her life, right in the chest. Malkovich adds humor as a neurotic conspiracy-type, which is used well in the film. Parker also adds her own laughs as the straight man caught up in the midst of all this action and violence.

Worth seeing, much better than it should be. 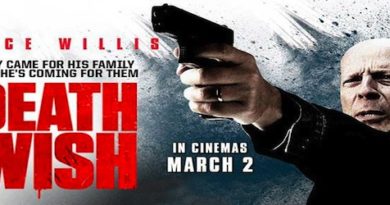