UPDATE: Brett Norensberg, JCVD’s talent agent, got back to us with this, “Sheldon misled you unfortunately; I do not even have an offer for JCVD to do Expendables 2.  I am sorry; I believe Sheldon didn’t understand this himself.” At the moment this can only be considered a rumor. I strongly believe that Lettich is in a position to know though, and an official announcement is more than likely to happen soon. 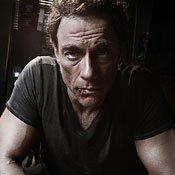 He also said, “I forgot to mention the best piece of news: no fight! At least, not this year.” So the fight is still being put off, which we pretty much knew after the “heart episode” thing that went down. Seems like advertisers are scared Van Damme might keel over during the match.

Anyhow the best piece of news is Expendables 2 in my opinion, I could care less if he fights, just want to see him back on the big screen alongside Stallone and the gang.

6 thoughts on “Van Damme in Expendables 2?”