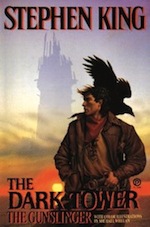 Brian Grazer and Ron Howard’s last attempt at bringing Stephen King’s The Dark Tower series to both the big and small screen failed miserably, burning out in a blaze that many thought it could never be revived from. Grazer recently spoke with MTV at the press junket for Tower Heist and said that HBO has been brought on board to do the television part. He claims that Javier Bardem is still prepared to take the role of Roland Deschain and that they have reduced the budget of the film by $45 million. This makes him confident that the film will get made. Personally I’d rather see this get made than The Stand, although a good version of that would be great as well.

Starz has picked up David S Goyer’s (Blade, Batman/Dark Knight and now Superman/Man of Steel) Da Vinci’s Demons for an eight episode run in 2013. Starz has been moving more and more towards male dominated programming, especially after the huge success of Spartacus and Game of Thrones. Da Vinci’s Demons stays true to those formulas by taking place in the past, where swordplay will most likely play a prominent role. Goyer had this to say:


“
“This will be a show about secret histories, genius, madness and all things profane. I’m particularly excited that I get to do it on premium cable, where the story can be as dark and challenging and irreverent as it deserves to be. Starz and BBC Worldwide Productions have been nothing but supportive.”

AMC has already renewed The Walking Dead for a third season, which isn’t a surprise after the huge audience draw for the second season’s opener, which reached 7.3 million people. My only complaint about this series is how small it is. These people don’t really do much, although we still have all of this season to see more and now with season 3 already a go, perhaps they will start building in longer story arcs. It’s come close, but for me it still hasn’t reached the brilliance of Zack Snyder’s Dawn of the Dead remake. Now doubling the number of episodes from season one’s six to thirteen for season two almost guarantee’s this show will take it to the next level.

The Current State of Science Fiction on Television