“The Nightwing Bundle Pack for Batman: Arkham City will be available November 1. Nightwing comes complete with his own unique gadgets and special moves, and is playable in all challenge maps in the game, as well as two additional challenge maps that are included with the pack: Wayne Manor and Main Hall. The pack also contains a bonus Animated Series Nightwing character skin.” 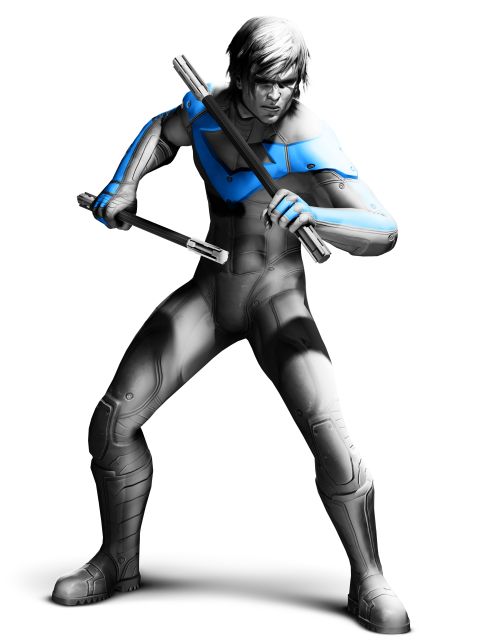 Nightwing’s new design looks clean and has an updated realistic feel to match the rest of the Arkham City’s cast. I really like the fact that both Nightwing and Robin come equipped with weapons as their main form of attack. Nightwing’s escrima sticks look especially appealing. As someone who studies Serrada Escrima, I can’t wait to beat down some Arkham City scum with the high-tech sticks.

Along with the new Nightwing design came some good news for those worried about missing out on preorder bonuses. The preorder characters will also be available as downloadable content at a later date. So, everyone will have access to the characters for an additional cost.

The Nightwing Bundle Pack for Batman: Arkham City will be available on November 1st, 2011 for $6.99 on the PlayStation Network and for 560 Microsoft Points on the Xbox LIVE® Marketplace.

Robin will be available as downloadable content for those that did not preorder through Best Buy on November 22nd for $6.99 on the PlayStation Network and for 560 Microsoft Points on the Xbox LIVE® Marketplace.