This is my list of my top five favorite gambling movies. Gambling has been the center of many films, and lends itself to defining some great characters. Dirty and gritty these people walk a thin line – some are fast talkers, others only speak with their eyes. Most are down and out, but they usually find their wins in extreme situations, and we find entertainment in the tug of war possibility between riches and death. After checking out my top five gambling films be sure and see this list of top casino movies. 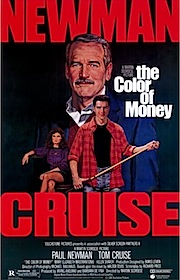 Oscar-nominated in 1961 for his performance as pool hustler Fast Eddie Felson in The Hustler, Paul Newman won that award a quarter century later when he reprised the role in The Color of Money. At the end of The Hustler, Felson was banned for life from playing the game professionally. In the intervening years, he has become what the despicable George C. Scott was in the 1961 film: a front man for younger hustlers, claiming the lion’s share of the winnings. His latest “client” is arrogant young Tom Cruise, who is goaded into accepting Felson’s patronage by his avaricious girl friend Mary Elizabeth Mastrantonio. Cruise learns not only the refinements of the game, but also the dirty trickery that will help him lure in the suckers. As Cruise becomes successful on these terms, Felson seethes with jealousy, hitting the bottle and carelessly allowing himself to fall victim to another hustler. He tells Cruise to get lost, and vows to make an honest comeback. It is inevitable from this point onward that the younger and the older player will square off in a game for the biggest stakes of all: Fast Eddie Felson’s self-respect. 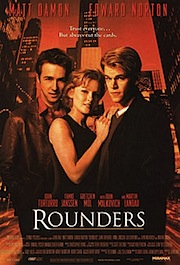 After law student Mike McDermott (Matt Damon) loses his entire savings to Russian club owner Teddy KGB (John Malkovich) he turns away from cards, devoting his attentions to his law studies and his live-in girlfriend Jo (Gretchen Mol), who’s concerned when Mike’s former gambling buddy Worm (Edward Norton) is released from prison. She has good reason to worry, since it takes Worm only a matter of minutes to draw Mike back into poker action. When she learns Mike has returned to the poker clubs, she moves out, and Mike begins to lose interest in his studies. Worm has a pre-prison debt, and the threatening Grama (Michael Rispoli) wants the money. Mike not only indulges the irresponsible Worm, he gets involved in Worm’s debts. When Grama demands $15,000 on a five-day deadline, the two buddies go into high gear with a non-stop, no-sleep gambling binge that spirals downward toward an ultimate confrontation with Teddy KGB. 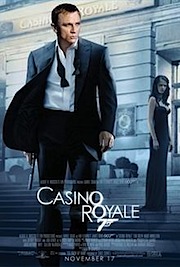 James Bond (Daniel Craig) has earned his “00” status by masterfully executing a pair of death-defying professional assassinations. Now assigned the task of traveling to Madagascar to spy on notorious terrorist Mollaka (Sebastien Foucan) for his maiden voyage as a 007 agent, Bond boldly goes against MI6 policy to launch an independent investigation that finds him traversing the Bahamas in search of Mollaka’s notoriously elusive terror cell. Subsequently led into the company of the mysterious Dimitrios (Simon Abkarian) and his exotic girlfriend, Solange (Caterina Murino), Bond soon realizes that he is closer than ever to locating well-guarded terrorist financier Le Chiffre (Mads Mikkelsen), the man who has personally bankrolled some of the most prevalent terrorist organizations on the planet. When Bond learns that Le Chiffre is planning to partake in an upcoming high-stakes poker game to be played at Montenegro’s Le Casino Royale and use the winnings to establish his financial grip on the globe, M (Judi Dench) assigns beguiling agent Vesper (Eva Green) the task of watching over the fledgling agent as he plays against Le Chiffre in a covert attempt to destroy the nefarious gambler’s well-established monetary stronghold in the underworld once and for all. Bond will need more than his legendary gambling skills in order to win this dangerous game, though, and after allying himself with local MI6 field agent Mathis (Giancarlo Giannini) and CIA operative Felix Leiter (Jeffrey Wright), the endlessly suave super-spy puts on his poker face for a high-stakes game of cards in which the stakes are not measured in dollars, but human lives. 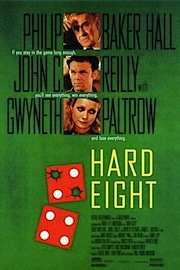 John (John C. Reilly), a half-bright loser stranded in Reno, is down to his last few bucks when Sydney (Phillip Baker Hall), taking pity on him, buys him breakfast and offers him a few tips on making money in the casinos. Two years later, John has become Sydney’s partner, but his lack of common sense goes from problematic to dangerous when he falls in love with Clementine (Gwyneth Paltrow), a cocktail waitress who isn’t above turning a few tricks when she needs to make money — and isn’t any brighter than John. Hall and Reilly, both first-rate character actors, are cast in rare leading roles, and Paltrow is cast strongly against type as a part-time prostitute with a serious lack of street smarts. 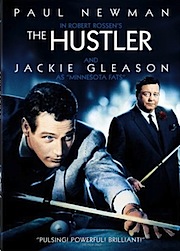 A boozing pool shark works his way up the ranks from small pool halls to the big-time in the Midwest. Along the way, he picks up a promoter and a girlfriend, who was a former hooker, and wants to face the challenge of playing Minnesota Fats, the best of the best. Paul Newman would be nominated for an Oscar for his role as Fast Eddie, but would win years later when he reprised the role in Martin Scorsese’s The Color of Money.

There you have it, perhaps you’d agree with some of my pics, perhaps not. Putting up any best of list is a gamble (so was that joke). So now you’re probably amped up to place some bets, I’d suggest you play my favorite game of cards, blackjack.