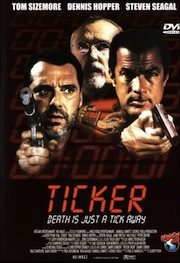 Prolific director Albert Pyun has announced via his Facebook page a director’s cut of ‘Ticker’. As was the case with the newly released ‘Cyborg’ director’s cut, this will also be pulled from an old VHS. The big difference between these two is Pyun’s negative comments against the studio cut of ‘Ticker’ versus the nice things he’s said about the cut Van Damme and Sheldon Lettich did for ‘Cyborg’ (not that he’s all fun and games about the ‘Cyborg’ debacle). He went as far as saying “Ticker did not resemble my cut at all. It’s an appalling mess and tacky.”

According to Pyun there are some major changes, “My version is set in Chicago and no stock footage. No crazy flashbacks.” He also stated this release will feature a “scorching commentary. I think people will be shocked at how a good film was mutilated by greedy bastards.” Pyun has said some nice things about Seagal and the rest of the cast (featuring Tom Sizemore, Jaime Pressly and Nas), but who knows what will be revealed in the commentary as this was a transitioning point for Seagal from major motion pictures to direct-to-video. More news about the release was promised next week. We are excited and can’t wait to get our hands on a copy, the commentary alone deems it worth while.