Remarkably reminiscent of the 1985′ Eastwood film ‘Pale Rider’, and equally influenced by the work of Sergio Leone, Peckinpah and Walter Hill. The fourth film from director/actor Dolph Lundgren is a low-key throwback to the spaghetti westerns of the 1960’s-70’s. In this outing Lundgren stars as Ryder, a deeply religious and mysterious savior to a group of Native Americans reeling from the death of a family member at the hands of the ruthless drug baron ruling their town. Supplant the motorcycles with horses and it becomes obvious that this is in essence a classically structured ‘Western’ with hints of ‘Shane’ thrown in for good measure.

Sharing a co-writing credit Lundgren, the screenwriter has wisely chosen to emphasizes the mythical quality of the story. Rather than supply a straight-forward ‘revenge’ tale, the narrative is clever in its handling of the religious over-tones of it’s title character and the symbolism of the dialogue and imagery. Unfortunately a visually unappealing color palate of grey and black, drain the picture of life or energy. This has got to be one of the worst looking movies in recent memory. Characters are awkwardly framed in some close-ups and the image appears soft on numerous occasions.

Not to say the film isn’t without value to fans of the genera or star. The supporting cast is lively, specifically Matthew Tompkins as the crooked autodealer/drug runner and John Enos III as a bad-ass biker brought in to control Lundgren. Most films of the ilk start out entertaining and peter out 40 minutes in. This is the rare example of the opposite, a fairly dull 2/3rds are more than made up for by a kick-ass third act that concludes (appropriately) with a showdown in the deserted town. A step backwards for Lundgren in his progression as a director. 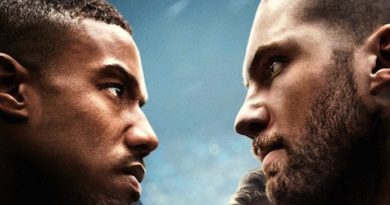