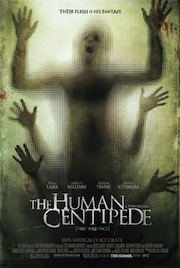 Last year’s The Human Centipede was one of the most disgusting horror films I’ve ever seen. Not that it was all that scary, just the thought of creating a monstrosity by surgically stringing people end to end (ya, that’s the fecal hole to the food hole), let’s just say it’s quite the sight. Other than that the film is a straight forward horror flick about a mad doctor who kidnaps some people and they continuously try to escape. So what’s the difference between the first and second that got the original an “18” rating in the UK and made the second illegal to sell there? The first tells the story from the view of the kidnapped. The second from the view of the kidnapper, which promotes the objectivity of his victims and doesn’t allow the audience to connect with them, but instead with the evil inside the antagonist. I could be wrong, but I think that even a portion of the original film’s audience would turn this one off. These are the reasons the British Board of Film Classification found the Human Centipede II “sexually violent and potentially obscene” and unfit for human consumption: (Warning: they go into graphic detail)

The first film dealt with a mad doctor who sews together three kidnapped people in order to produce the ‘human centipede’of the title. Although the concept of the film was undoubtedly tasteless and disgusting it was a relatively traditional and conventional horror film and the Board concluded that it was not in breach of our Guidelines at ‘18’. This new work, The Human Centipede II (Full Sequence), tells the story of a man who becomes sexually obsessed with a DVD recording of the first film and who imagines putting the ‘centipede’ idea into practice. Unlike the first film, the sequel presents graphic images of sexual violence, forced defecation, and mutilation, and the viewer is invited to witness events from the perspective of the protagonist. Whereas in the first film the ‘centipede’ idea is presented as a revolting medical experiment, with the focus on whether the victims will be able to escape, this sequel presents the ‘centipede’ idea as the object of the protagonist’s depraved sexual fantasy.

The principal focus of The Human Centipede II (Full Sequence) is the sexual arousal of the central character at both the idea and the spectacle of the total degradation, humiliation, mutilation, torture, and murder of his naked victims. Examples of this include a scene early in the film in which he masturbates whilst he watches a DVD of the original Human Centipede film, with sandpaper wrapped around his penis, and a sequence later in the film in which he becomes aroused at the sight of the members of the ‘centipede’ being forced to defecate into one another’s mouths, culminating in sight of the man wrapping barbed wire around his penis and raping the woman at the rear of the ‘centipede’. There is little attempt to portray any of the victims in the film as anything other than objects to be brutalised, degraded and mutilated for the amusement and arousal of the central character, as well as for the pleasure of the audience. There is a strong focus throughout on the link between sexual arousal and sexual violence and a clear association between pain, perversity and sexual pleasure. It is the Board’s conclusion that the explicit presentation of the central character’s obsessive sexually violent fantasies is in breach of its Classification Guidelines and poses a real, as opposed to a fanciful, risk that harm is likely to be caused to potential viewers.