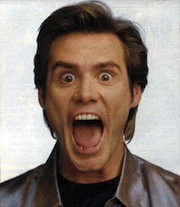 Jim Carrey told ComingSoon.net that his next project could be a Bruce Almighty or Dumb and Dumber sequel in a recent interview.

Seems lately everyone’s going back to the well to re-establish themselves as the stars they once were. And Carrey’s no exception. After all, Bruce Almighty was suppose to be his return to the comedies of his roots a la Liar Liar.

Bruce Almighty was spun-off in the 2007 Steve Carrell flop Evan Almighty. Dumb and Dumber was prequalized with Dumb and Dumber: When Harry Met Lloyd in 2003. Neither of which muck up the waters for a true sequel starring Carrey.