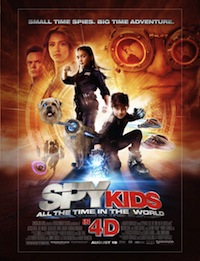 Robert Rodriguez is no stranger to b-movie antics, beating the current mix of 3D films to the marketplace back in 2003 with Spy Kids 3-D: Game Over. Granted the big Hollywood version of 3D is much better than the anaglyphic blue and red glasses Rodriguez was forced to use (there wasn’t a 3D digital projector in every corner of the world back then). Still, he proved that a gimmick could revive a franchise as Spy Kids 3-D came in just under $1 million domestic of what the original Spy Kids took in.

For every ticket purchased, the theater patron will receive a scratch-n-sniff card with several numbers on it. When a number comes up on the screen, scratch it on the card and sniff away. The idea being, just like with 3D, that you get a more immersive experience in the theater. “Families are going to love the interactivity of this new addition to the movie going experience. And best of all, you won’t have to pay extra for 4D Aroma-Scope, which will be provided to every theater whether it be 2D or 3D,” said Rodriguez.

This idea isn’t new, in fact Rodriguez has been beaten to the punch earlier this year by Full Moon Pictures extremely limited release of Evil Bong 3D: The Wrath of Bong back in April. That film was shown in 3D and came with a scratch-n-sniff card with numbers on it.

Obviously he can no longer best others with the use of 3D in his films, as they all are using the same advanced 3D technology, but what about adding a fourth dimension? Can 4D bring this franchise back? Do you think it’ll boost the film’s box office take? What will Jessica Alba smell like? Find out all this and more when Spy Kids: All the Time in the World opens in 4D theaters everywhere on August 19, 2011.

Podcast EP76: Arnold and Sly in the Hospital, Nazis From the Moon Iron Sky Trailer