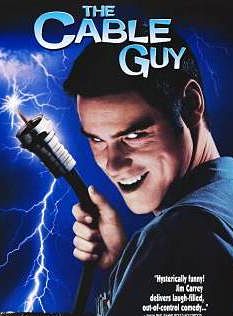 The movie that became a tabloid sensation and infamous (perceived) box office failure. All Hollywood was quietly rooting against Carrey after an unprecedented string of hits propelled him to the rankings of worlds highest paid actor at $20 million dollars a film. Having set the bar so high Carrey was expected to deliver another home run, instead he chose a dark script heavily re-written by producer Judd Apatow and (then unknown) director Ben Stiller. They turned in a strangely offbeat comedy that blindsided audiences expecting the goofy antics of Ace Ventura. Carrey’s Kip ‘The Cable Guy’ is a sad man reminiscent of DeNiro’s Rupert Pupkin in Martin Scorsese’s King of Comedy. Moments of hilarity ensue. A scene in which Kip (Carrey) sings a karaoke rendition of Jefferson Airplane’s ‘Somebody to Love’ is an example of vintage antics from the endlessly talented physical comedian. A film that grows on you with repeat viewings, perhaps that’s the reason for the inexplicable popularity the movie has received on cable and DVD. 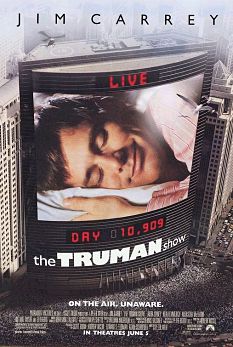 Australian Director Peter Weir had been known in Hollywood as a ‘serious’ filmmaker that had the potential to turn ‘movie stars’ into Oscar contenders. Having guided Harrison Ford and Robin Williams to nominations for Witness and Dead Poets Society, respectively. Examining the intriguing concept of a baby raised in an artificial environment for a reality television show. Until one day Truman (Carrey), an insurance salesman, discovers his entire life has been for other people’s enjoyment. The film is a one of a kind experience that plays with the viewers emotions; jumping from empathy of the trapped Truman to the natural human voyeuristic tendency to watch others in their most vulnerable moments. Jim Carrey is absolutely heartbreaking in an emotional sequence in which he tries to escape (in vain) from the massive television set that has served as his entire existence. A massive indictment of the reality television boom and raises the question about the amout of ‘reality’ in said shows. While the film garnered three Oscar nominations, Ed Harris ‘Best Supporting Actor’; Peter Weir ‘Best Director’, Anderw Niccol ‘Best Original Screenplay’, but sadly Carrey’s outstanding performance was overlooked. 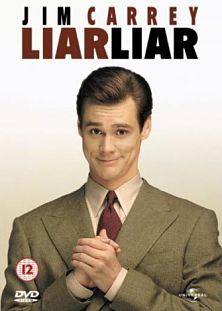 The quintessential Jim Carrey comedy and the biggest hit of his career. Fletcher Reede, a motor-mouthed concious-free defense attorney with little care for the feelings of others, on the eve of a big case Reede suddenly finds that he is unable to tell a lie for 24 hours due to a birthday wish from his ignored son. Director Tom Shadyac (Ace Ventura, Bruce Almighty) lets Carrey’s inner wildman loose. Many scenes feel ad-libed and Shadyac has the good sense to exploit Carrey’s physical comedy routines. A sequence in which he assualts himself in a men’s room is one of the film’s many giggle inducing moments. The most polished (in technical categories) comedy of Carrey’s career and the film that propelled him into the strastopher of most popular comedian in the world. 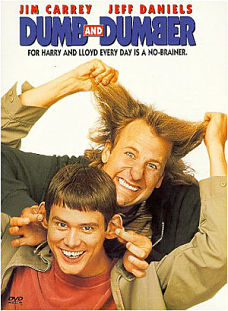 Peter and Bobby Farrelly were relative unknowns when they made this low-budget comedy staring a fairly unknown televsion comedian. By the time of its release in December 1994, Jim Carrey had already marshaled two unexpected hits (Ace Ventura, The Mask) into box-office gold. The third blockbuster in a row from the hottest man in films is arguably his funniest movie ever. Harry (Jeff Daniels) and Lloyd (Carrey) are two brainless losers who try to return a suitcase full of money to its pretty owner. After a journey full of accidents they arrive in snowy Aspen, Colorado and try to find her. The thin premise is just a clothesline to string together some of the funniest scenes that have ever graced the silver screen. I recall seeing this film in a packed movie house and the laughter being so raucous that you often missed the next line because the audience was still chuckiling at the last bit. A comedy that cemented the legacy of Jim Carrey as one of our most beloved comedians. 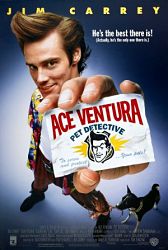 Remember when Jim Carrey was only known as the ‘white guy on In Living Color‘? Ace Ventura changed all of that and proved this constantly mugging rubber faced wildman was a truly gifted preformer. As the pet dective on the case of a missing Mascot, Ace must overcome contempt from his rivals on the police force and do battle with a cross-dressing villain bent on revenge. Carrey is amazing in this movie expending massive amount of energy in his efforts to win over audiences, and it worked. One of the rare movies I watched multiple times in a row. The first in an unprecidented number of box-office hits and the finest work of Jim Carrey’s career.

Get these Best of Jim Carrey Movies from Amazon.com

Podcast EP148: The Cold Light Of Day And The Words Predictions, The Dictator Review