UPDATE: I’ve just been informed by Steve Austin’s publicist that Austin didn’t make it into The Last Stand. What a shame, him and Schwarzenegger together would have been great. 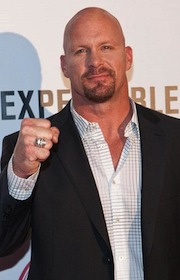 EXCLUSIVE: Recently spoke with Steve Austin and his people via e-mail and this is what they had to say about him not returning for Expendables 2 and taking on a role alongside Arnold Schwarzenegger in his comeback film The Last Stand.

At this stage of the game Steve Austin is not involved with Exp 2. Sly originally wanted to bring his character back, once he opted out of writing and directing, the script took another direction. I will not be doing Exp 2 as I am going to do Arnold’s movie in New Mexico. Rumor is Arnold is shooting a couple of days on Exp 2 but not confirmed. Hope you will follow me on The Last Stand.

As far as The Last Stand is concerned, no word on if Austin will be a bad guy henchman as in The Expendables, but I could also easily see him as one of Schwarzenegger’s deputies.

This information is a turnaround from Bruce Willis saying back in October 2010 that Austin will return for Expendables 2, even though his character did technically die in the first film. IMDb at the moment has him listed as a cast member, but they are often wrong when listing cast in in-production films. Although with recent reports of the production moving to China (which is why Donnie Yen is being courted by producer Avi Lerner) it seems that the script is in constant flux and perhaps no actor aside from Stallone and I’m sure Statham are an absolute lock. Stallone and director Simon West have both been extremely quiet on the whole affair. Essentially I’ve heard of a start date for shooting being September 19 in Bulgaria, but with the China deal about to go down what changes will that bring to the current movie? Also IMDb lists production start in October, which is close enough I know, just seems like no one really knows what’s going on and most news being reported on Expendables 2 is confusing with slight variations.

Honestly this seems like too many last minute changes, and it’s all for money. My biggest fear is pretty much being realized with the inclusion of the Chinese distribution company- this movie isn’t being created for fans in the US, but for the foreign marketplace, which is where the first film made most of its money. It also seems that this is all out of Stallone’s hands, which might not be true, but with him taking a back seat on writing and directing and being busy on Bullet to the Head it really does seem that way to me.

Hopefully the rumors are right about Arnold’s return in Expendables 2, considering he could easily make a small appearance again, since it only took one day to shoot his cameo in the first film. To reiterate what we’ve already reported recently for casting on Expendables 2, no offer on the table for JCVD yet, Donnie Yen and Chuck Norris have both been approached but nothing decided, and John Travolta’s people are saying his involvement is just rumor.

Who would you absolutely want to see return to Expendables 2? What new cast members would guarantee you see it in theaters? Do you think Austin and Schwarzenegger should have a fight scene in The Last Stand?