Infectious disease movies seem to showcase the anxieties of the society in which they were made. These anxieties can be Communist takeover, anxieties about the military, the fear of AIDS or other diseases, terrorism, or the dread of things generally going out of control and falling apart. However, since at least one protagonist survives at the end in the overwhelming majority of these movies, they also give an admittedly skewed message of hope. 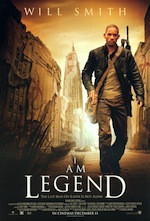 I Am Legend was the second remake of Richard Matheson’s novel I Am Legend, and starred Will Smith as a man who seems to be the last human on earth uninfected by a virus that was originally made as a cure for cancer. The virus has wiped out something like 90 per cent of the human race and turned nearly everyone else into a raving, cannibalistic, light-shunning zombie. The film works as a parable of modern fears of terrorism, among other themes. Though Col. Neville, Smith’s character, lives in a fortress, it still doesn’t save him or his dog, and the death of Sam (his dog) was worse than enduring all those marauding zombies, both for Neville and the audience. At the end, of course, there’s redemption when Neville saves a woman and a young boy through the wholly unnecessary sacrifice of his life. But, I Am Legend was a great film overall. 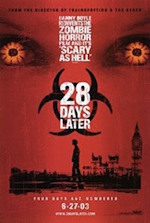 Here’s another film, from the U.K. this time, about a virus that causes people to turn into crazed, cannibalistic zombies. This wonderfully terrifying film, among other things, subverted the idea that zombies are slow and shambling, for the zombies in this flick move very fast indeed. In this case, the virus was let loose when some PETA types sprung a bunch of chimpanzees from a medical research lab. The virus, called the “Rage” virus, moves very fast as well. Within seconds of being bitten, a person is infected and has an uncontrollable urge to infect others. Within 28 days the city of London is as empty as I Am Legend’s New York. This movie was cited for its caustic view of the military. Frankly, the military in this movie is inept, and that’s when they’re not being corrupt. Like I Am Legend, people survive, but the ending is uncertain. 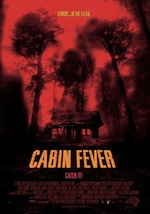 This film, which was director Eli Roth’s first major motion picture, has a bunch of young folks trapped in a cabin in the woods, but instead of being stalked by a serial killer, they’re stalked by a flesh eating virus. The film was a worthy debut, with some credibly squicky moments. How can a virus that rots and dissolves one’s flesh not be squicky, after all? The audience can appreciate how the kids are still punished for sex, as they would be in a serial killer movie. The ending, with the virus finding a way to perpetuate itself upon the rest of the world, is clever. 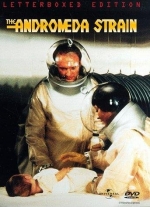 This film, based on a Michael Crichton novel, starred a deadly infectious agent that came from outer space. The film was directed by Robert Wise, with special effects by the great Douglas Trumbull. The infectious disease in this flick causes blood clots that quickly kill its victims or makes them go mad. This film, too, makes a mordant commentary on the military industrial complex, for the mission of the military satellite that was launched was to collect space bugs for bioweapons. Not only that, but the organism which seems to be at least quasi-sentient, would probably benefit from the nuke that’s supposed to kill it. 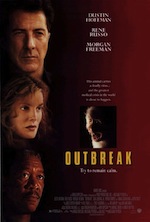 This fairly awful little film traded on the alarm caused by the discovery of the ghastly Ebola virus. Once again, the military is seen as up to no good. The film begins with the bombing of an infected camp in what was then Zaire. Later, an American town is almost bombed in turn, not so much to stop the spread of the virus but to benefit some warmongering Major General. Once again, it’s a bad little film, the direction of Wolfgang Petersen, and the presence of Dustin Hoffman, Morgan Freeman and Kevin Spacey notwithstanding.

One thing is certain: the world can look forward to other infectious disease movies in the future! Audiences can’t wait.