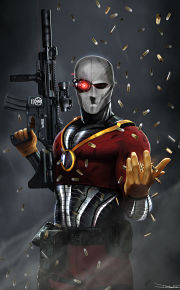 With the release of the Batman: Arkham City video game just around the corner, developers have once again added another villain from the DC Universe to the already large cast. The sharpshooting villain Deadshot will now set his sights on Batman in the highly anticipated upcoming title. Although little known to the general public, Floyd Lawton AKA. Deadshot is an interesting character who matches up nicely with The Caped Crusader. Deadshot an expert marksman who claims to have never missesd a shot (hence the name, Deadshot), will certainly be an interesting foe for Batman to tango with in Arkham City. Deadshot is normally recognized by the gleaming mask of steel that covers his entire face. For the game, however, the design team has opted to build on the gritty feel they have already developed, substituting the metal mask for a more workmanlike leather mask.

It seems DC Comics is hoping to use Arkham City as a stepping stone for future projects. Improving the general public’s knowledge of the DC Universe is an important step if the company hopes to branch out to lesser known titles in the future. Often DC seems to be plagued by dated characters that are all too familiar to the audience. If DC wants successful films that don’t star Batman or Superman, they need to create some buzz. Adding some “new” blood would help the company appeal to the a generation of fans. Deadshot has the potential to be a very popular villain should he ever appear on the silver screen. 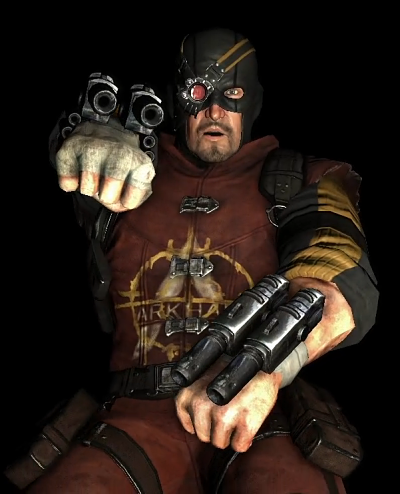 Batman: Arkham City is set to be released on October 19th.