The gameplay is pretty straight forward, solve puzzles and smash everything to bits. Oh yeah, you get to build stuff too. Actually, the game lets the characters auto build objects requiring the player to only hold down a button and watch. It’s a light hearted experience to say the least, aside from the sometimes frustrating puzzle design. The puzzle issues exist because the game wants to hold your hand 90% of the time. The other 10% of the time, however, the developers leave you hanging. For me this design issue cripples the game at points. Either let the computer hold my hand the entire game, or leave me in the wind to find my own way. With the current system, parts of puzzles that are not supposed to be hard are often difficult and extremely frustrating. 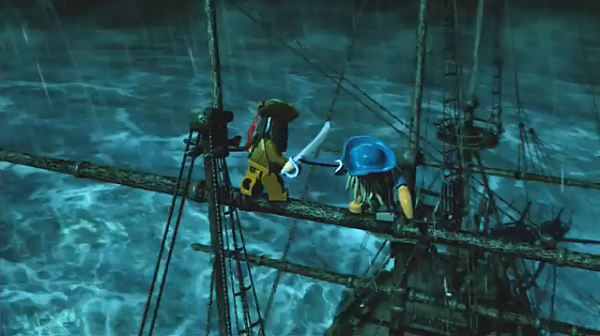 What the LEGO franchise does do well is level design. Pirates takes you through the world of the Disney films, often allowing you to spend significant time in areas that are quickly glossed over in the movie. This keeps the experience interesting with each level having a unique look and feel. So while the gameplay tends to be more of the same, you’ll find yourself with intriguing things to look at and interact with. In this regard, Davy Jones’ locker really stood out and is probably my favorite example of how the game is able to keep things entertaining. The massive amount of unlockable characters (70+) also adds depth to the game. Although only a few characters have special attributes designed to help you progress in the game (Will Turner can throw an axe to hit objects from a distance, while Capt. Jack uses his compass to find treasure), the sheer abundance of characters is a welcome addition.

For me the LEGO games have a certain level of nostalgia. I would like for there to be some actual building of objects by the player, but all in all I enjoyed playing through LEGO Pirates of the Caribbean.

Bottom Line: If you haven’t played a game in the LEGO series I would highly suggest picking up whatever title is closest to your heart (Star Wars, Batman, Indiana Jones, etc.) and giving it a shot. I think you’ll be pleasantly surprised at how well the games deliver an entertaining experience for all ages.