Like all video games based on movie franchises, I approached Transformers: Dark of the Moon with a bit of caution. Although last year’s Transformers: War for Cybertron was surprisingly well polished, this year’s effort falls short in several categories. The title suffers from bland level design and repetitive combat. Rather than relying on smooth design to move the player through the game, Transformers: DOTM chooses to send waves of enemies while you wait in virtually fenced-in arenas. After just a few minutes of playing I knew I was in for a long night. It’s not that Transformers: DOTM is horrible, it’s just that the game did absolutely nothing to impress me on any level.

Transformers: Dark of the Moon’s gameplay is a mix of third-person shooting and combat racing. Essentially you can switch between robot form and vehicle form with the tap of a button at almost any time throughout the campaign. Unfortunately, the lack of balance between the two forms creates some severe issues with the overall gameplay. When in vehicle form your Transformer is also in Stealth Force, enabling you to take more damage and dish out more punishment. In robot form, however, you get no benefits besides maybe looking a bit ‘cooler.’ When I say no benefits, I mean NO benefits. As a robot you’re forced to reload constantly and the amount of damage you can take is pathetic when compared to your vehicle form. I would have no problem with the differences between the two forms if the game didn’t try to presently them as equals, because clearly they are not. The faster, better armored, unlimited ammunition vehicle is the superior choice for all battles, unless of course you enjoy dying or fighting handicapped. 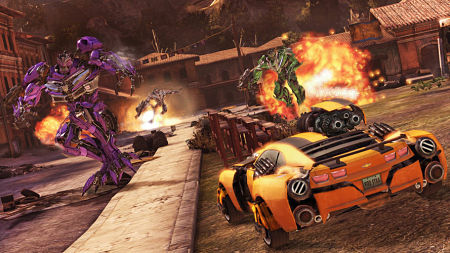 Unlike last year’s War for Cybertron you no longer have the option to pick up new weapons for your Transformer. Instead each Transformer has its own unique weapon type. Giving each Transformer something different to bring to the table is not a bad idea, but when you combine it with all the other limiting aspects of the game it makes you question the developer’s choice. I just kept asking myself when does the real fun start? The answer was never.

Bottom Line: Transformers: Dark of the Moon is mediocre at best and boring as hell at worst. There are so many good games on the market these days, I would caution against even wasting your time renting this. If you want to play a well-designed entertaining Transformers game, then pick up Transformers: War of Cybertron. If you already have War of Cybertron then play through it again because it is superior to Dark of the Moon in every way, shape, and form.