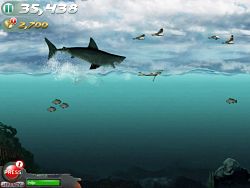 Jaws Revenge is an entertaining iOS (iPad, iPhone, iPod Touch) game with a small price tag. Based on the classic movie franchise, Jaws Revenge is the second Jaws based game released on the iOS platform. In a fun twist, rather than save people from Jaws like in the first iOS game. You instead control Jaws himself, directing the giant shark to devour any object in his path.

Jaws’ gameplay uses one touch controls to move Jaws up and down in the water as he consumes everything in his path (people, boats, helicopters, paratroopers, you name it). Touch the screen and Jaws dives into the water, release your finger and he leaps out of the water and into the air. If you tap the screen when in the air Jaws lunges forward with one last effort. Once you get the hang of it, Jaws Revenge is one of the best, if not the best one touch games on the market.

Bottom Line: At only $0.99, do yourself a favor and download Jaws Revenge. Even if you don’t think its incredible, you’ll still get your money’s worth. Plus, wrecking havoc as a mass-murdering giant shark is just plan old fun.