With Batman: Arkham City only a few weeks away fans should expect to see almost daily updates on the title. PS3Trophies.org recently posted the Arkham City Trophy list. The downloadable content portion of that list revealed that players would be able to play as other characters in addition to Batman during Challenge Mode.

The trophies confirmed that both Nightwing and Catwoman would be playable characters in challenge maps. For those that are unfamiliar, the original Robin aka Dick Grayson is now the hero Nightwing. Details are still unknown but its seems that those wanting to play as Catwoman will have to pay extra for the Downloadable content.

Check out the complete Preorder trophy list courtesy of PS3Trophies.org. 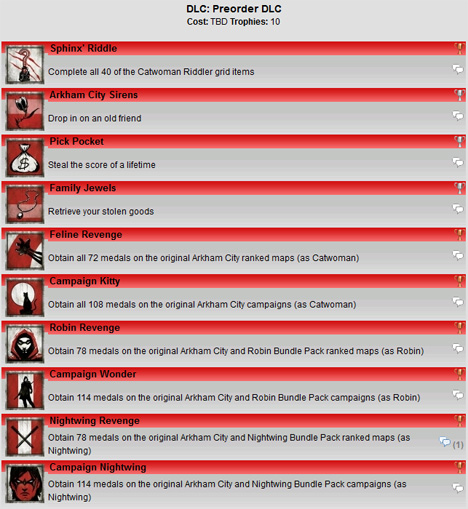 2 thoughts on “Play as Nightwing & Catwoman in Batman: Arkham City”