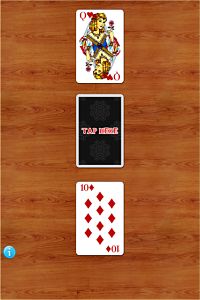 The name says it all, Always Win! Always Win is a prank app disguised as a simple card game. The game works like a standard version of the card game high or low, but with a unique and tricky twist. Two players face off and each is given a card, with a card labeled Tap Here placed in between. Clicking the center card will virtually turn over each players card at the same time. The player with the highest card wins, it’s that easy.

The catch, however, is that the Tap Here card can manipulate the outcome depending on where you press. For a fair game of high or low, you simply press the center of the Tap Here card and the cards are randomly generated. Controlling the outcome is just as simple. Tap the top part of the card and the card above will end up as the high card. Tap the bottom part of the card and the high card will be on the bottom. So as long as the owner of the app is the one doing the clicking, she or he can dictate whatever outcome they like.

This is a great app for the college atmosphere. It could be used both for playing games and settling disputes (possibly in an unethical way). It’s a neat trick to have up your sleeve and you never know when you might need it. High or low is occasionally used as a drinking game, so the app can be used for that as well.* 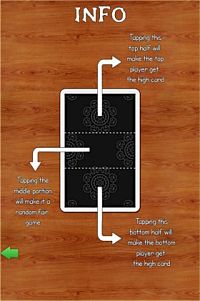 The only improvement I would like to see on this app is graphical. It would be nice if the cards were maybe slightly larger since it was occasionally hard for my big fingers to accurately press the part of the card that was needed. I could hit the right area, I just had to be a bit more precise then I would have liked.

Bottom Line: Always Win is a fun, straight forward iOS app with a unique twist that puts the odds in the app owners favor. You can easily earn back the $0.99 you spent on it with a “friendly” bet or two.

*We at Movie Mavericks do not condone drinking games, but we do condone having some good old fashion fun with your friends.