Restitution is a crime thriller about a writer researching the case of a string of murders. Bryan Spikes, an insurance fraud investigator, is killed and framed for the murders of people he was hired to investigate. A year later Alex Forrester, a one-time co-worker of Spikes and working on his first novel, shows up to gather what information he can for his book. With the help of Bryan’s ex-girlfriend and an obnoxious neighbor, Alex begins to unravel the mystery. It seems everyone in this city is in on it, and as Alex digs deeper, his life and the lives around him come under fire. Will Alex find Bryan’s killer and get Restitution? He will, and he’ll do it with a twist.

This noir wanna-be is a long, slow and boring trip to an uninspired twist ending. The acting is strong enough, lead Mark Bierlein does a great job and the supporting cast, Mena Suvari, C. Thomas Howell, William Sadler and Tom Arnold are all fine although most are only briefly in the film. Even Suvari as Heather, Bryan’s ex-girlfirend and Tom Arnold, Alex’s intruding slob of a neighbor, disappear for long stints of time. C. Thomas Howell is supposed to be the bad guy, but he doesn’t enter the picture until the end. This gives Alex no one to go after or spar off with during his long winding investigation. Which would be fine if he uncovered anything remotely interesting.

The first twenty minutes focus on Bryan and Heather falling in love and his insurance fraud investigations. This could have been boiled down to a five minute opening sequence instead of the entire first act. The second hour is Alex wandering around and slowly picking through the supporting cast as he figures out who-dun-it. The last twenty minutes breaks down and turns into an action film as Alex suddenly becomes a bad ass and moves in to take out C. Thomas Howell and his henchmen. Then there’s the big twist at the end which is so poorly set up throughout the film it feels tacked on as an afterthought.

Director Lance Kawas shoots the movie like a Lifetime original. Sure the framing is good, and the lighting adequate, but where’s the suspenseful look and feel of a murder mystery or noir film? Kawas doesn’t bring the necessary stylings to make scenes feel important, allowing the clues Alex uncovers to seem apparent and not integral to the plot. Mark Bierlein serves as screenwriter here as well, but with the part he plays and the twist at the end, it feels very self-servingly written.

I have to say I always enjoy Tom Arnold though. Without a doubt no matter how bad the material is he always brings the same level of enthusiasm to a role. Whether it be True Lies, The Stupids, or Restitution he is always himself. He even got a few laughs out of me in this one.

I can’t recommend this, but if you really enjoy mystery flicks, this isn’t completely horrible. Although, Restitution may leave you wondering where to get restitution on your wasted hour and forty minutes. 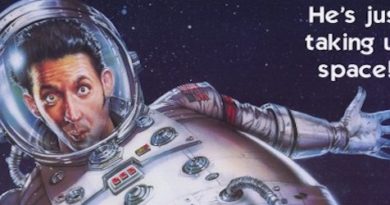