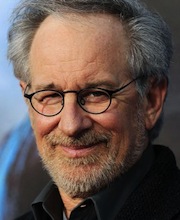 Speaking with Collider, Steven Spielberg talked a little about his plans for Jurassic Park 4, Robopocalypse and The Adventures of Tintin 2. He’s out as director on JP 4, is likely to start shooting Robopocalypse in September, Peter Jackson is directing the Tintin sequel, but Spielberg would very much like to return as director for the third.

I was thrilled to hear that Spielberg might be directing the fourth installment of Jurassic Park, but to be honest this is a franchise that many director’s can swoop in and direct successfully. It doesn’t require a Spielbergian flare to be good, as long as there are dinosaurs and running you’ve hit about all the required marks. Still I’m excited and can’t wait for both JP 4 and Robopocalypse. Tintin 2 and 3 I could do without.

“
About Jurassic Park 4 – “I can tell you that I’m not directing it. I’m producing it though.”

About Robopocalypse – “I’m making a science fiction movie probably in September called Robopocalypse based on Daniel Wilson’s book. It’s a cautionary tale about war between human beings and robots. It’s a big crowd pleaser, I think, a big action popcorn movie with a message. The message is actually in the popcorn! You have to get the popcorn, dig down deep in the bottom and they’ll be a message about what Robopocalypse is really about!”

About the Tintin sequel – “I’m not going to say which stories have been chosen for Peter Jackson’s sequel because Peter and I agreed that we weren’t going to let that information out yet,” he said. “The script is now being written. It’s more than one book, but it’s not three books, so that means it’s two books. It’s two and a half books that we’re combining with ‘The Secret of the Unicorn.’ And Peter will start working on the film this year. When he’s done shooting ‘The Hobbit,’ he’ll begin his performance capture work with the actors later in 2012, which I’m very excited about. And of course, I’m hoping I’ll be able to direct the third one. I’d love to do the third one because I had so much fun on the first one.”