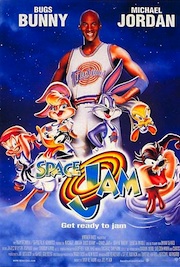 Michael Jordan agrees to help the Looney Toons play a basketball game vs. alien slavers to determine their freedom. Warner Bros. attempted to revitalize its animation division with this family adventure that blended live action and animation in the style of Who Framed Roger Rabbit (1988), reportedly coming in with a price tag of $100 million. Basketball legend Michael Jordan stars as himself, a retired sports hero trying his hand at baseball and failing miserably. Meanwhile, the Looney Tunes gang, led by Bugs Bunny, are kidnapped by aliens called the Nerdlucks. It seems that the Nerdlucks’ theme park, Moron Mountain (a barely-veiled dig at Disney) is failing to attract customers. The space invaders are convinced that the appearance of Bugs and his pals Porky Pig and Speedy Gonzalez will beef up business. Bugs makes his captors a deal — they’ll play a game of basketball for their freedom. When the Nerdlucks stack the deck by pilfering the talent of NBA superstars Charles Barkley and Patrick Ewing, the Warner Bros. heroes enlist the aid of Jordan, who returns to the court to help the classic characters. While he prepares to play, Jordan is aided by fellow celebrity Bill Murray. Director Joe Pytka previously created many of the television commercials that featured Jordan as a paid endorser. 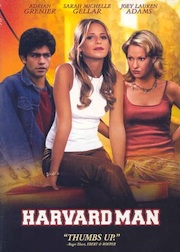 Director and screenwriter James Toback used his own experiences as a college student in the 1960s as the basis for this drama about a present-day student athlete who’s bitten off more than he can chew. Alan Jensen (Adrian Grenier) is a college sophomore struggling to keep up with an unusually busy schedule — while studying philosophy as a Harvard undergrad, he’s also a point guard on the school’s basketball team, and is juggling two girlfriends, cheerleader Cindy Bandolini (Sarah Michelle Gellar) and Chesney (Joey Lauren Adams), a professor ten years his senior. As Alan tries to stay on top of his classes and keep his love life sorted out, he receives some bad news from his parents — a tornado has devastated their home, and they need $100,000 to rebuild. Alan wants to help his parents, and as it happens, Cindy’s father is a Mafia boss tied in with a number of powerful bookies. Cindy uses her family’s connection to put Alan in touch with Teddy (Eric Stoltz), a bookie who’s willing to give Alan $100,000 in exchange for throwing a few games and shaving some points. Cindy also uses her dad’s bankroll to place a quarter-million dollar bet on the upcoming Harvard-Dartmouth game, certain Alan can ensure a predictable outcome. But when the games don’t go quite the way Alan expected, despite his best worst effort, he finds himself in dutch with the Mafia, while also attracting the attention of FBI agents who’ve been investigating Teddy and his associates. Amidst this chaos, Alan hops a jet home to give his parents the ill-gotten $100,000, and on the flight back decides to relax mid-flight by dropping a heroic dose of LSD, which turns out not to be one of his better ideas. Harvard Man was originally intended to star Leonardo DiCaprio as Alan, but after the project was put on hold in 1994, DiCaprio rocketed to fame in Titanic, which priced himself out of the project by the time James Toback was able to return to it years later. 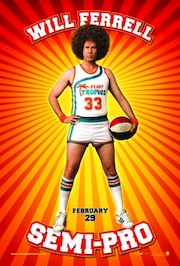 An outrageous comedy set in 1976 against the backdrop of the maverick ABA — a fast-paced, wild and crazy basketball league that rivaled the NBA and made a name for itself with innovations like the three-point shot and slam dunk contest. Jackie Moon (Will Ferrell), a one-hit wonder who used the profits from the success of his chart-topping song “Love Me Sexy” to achieve his dream of owning a basketball team; but Moon’s franchise, the Flint Michigan Tropics, is the worst team in the league and in danger of folding when the ABA announces its plans to merge with the NBA. If they want to survive, Jackie and the Tropics must now do the seemingly impossible — win. 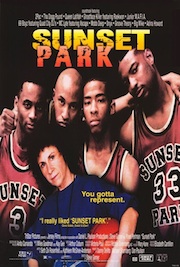 A Jewish high school teacher, Phyllis Saroka (Rhea Perlman), steps in to take on the thankless job of coaching the school’s inept basketball team, which is filled with ne’er-do-wells from the slums. She takes the job to get extra money to fulfill her dream of opening a restaurant on the Caribbean island of St. Croix. Phyllis has had bad luck with men, is dissatisfied with her teaching job, and is desperate to do something meaningful as she approaches middle age. Meanwhile, the players on the team are ambitious only about scoring drugs and girls and inventing their own rap songs. Butter (James Harris) is the team’s only really talented player, but he wastes most of his energy chasing skirts. Busy-Bee (De’Aundre Bonds) is a small but highly energetic goofball. The mind of Spaceman (Terrence Dashon Howard) has been diminished by learning disabilities and drugs. Phyllis’s greatest challenge is the brilliant, moody Shorty (Fredro Starr). Shorty teaches Phyllis the game, but he feels betrayed when he learns that she is planning to leave after one season. Perlman’s husband, Danny DeVito, served as the film’s producer. 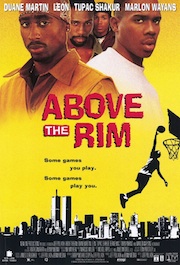 A young aspiring professional basketball player must make some tough decisions in this sports melodrama. Kyle Lee is a talented basketball player in high school. While he waits to find out if he will receive a scholarship to Georgetown he finds himself in a difficult dilemma over a playground basketball tournament. He must decide whether to follow his good-hearted coach or Birdie, the local gangster. Kyle is also feeling resentment for the security guard his mother is falling for. The coach also wants the guard to play, but due to the tragic death of a friend, the guard cannot bear the thought of playing again. 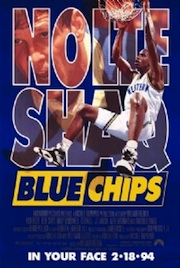 Blue Chips examines greed, cheating, and “winning at all costs” in the world of college basketball. Nick Nolte plays the stressed-out coach on the verge of his first losing season, who hits the road in search of new players not already signed by a bigger school. He finds three prospects: a precision Chicago shooter (Anfernee Hardaway), a giant farmboy (Matt Nover), and a talented troublemaker (Shaquille O’Neal). All three, wise to the ways of college basketball recruitment, make excessive financial and lifestyle demands before they can be persuaded to come to the school; the coach, already haunted by accusations of underhanded dealings, doesn’t want to dig himself a deeper hole but has no choice. 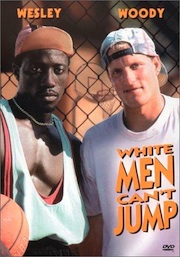 Ron Shelton (Bull Durham) wrote and directed the basketball-oriented seriocomedy White Men Can’t Jump. Woody Harrelson plays Billy Hoyle, a white con artist who hustles basketball games with black players, lulling his victims into the misguided notion that white men can’t match up with black hoopsters. One of his victims, African-American Sidney Deane (Wesley Snipes), becomes Hoyle’s “agent,” arranging his various inner city scams. Deane doesn’t feel as though he’s selling out his own people; he goes along with Hoyle to provide a better life for his wife, Rhonda (Tyra Ferrell), and son. The film breezes through several zany sequences, including one liberal-baiting satirical moment set at a black/white “solidarity” basketball game arranged by an ambitious politician. Crooked gamblers intrude upon the last scenes of the film, but Hoyle is rescued by his girlfriend, Gloria (Rosie Perez), a Jeopardy freak who realizes a lifelong dream by winning big on the Alex Trebek-hosted game show. 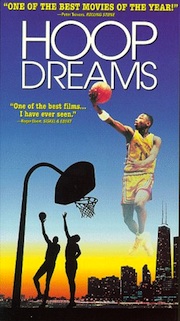 This documentary about the aspirations of high-school basketball players from inner city Chicago won awards from the Sundance film festival, the New York Film Critics Circle, and the Academy Award (Oscar) for best editing. Two young men are followed during their entire high-school career, beginning with their participation in playground games and ending with their being recruited by colleges. The obstacles these young men face include parental drug addiction, family poverty, and inner-city violence, as well as the usual obstacles that arise in competition, including physical injuries. While each aspires to leave the ghetto, there are many reasons to suppose they may not be able to, despite each beating the odds against them by winning college scholarships. 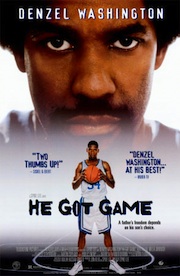 In this emotionally charged father/son drama, Jake Shuttlesworth is a prisoner who finds himself temporarily paroled, with the promise of a commuted sentence if he can convince his estranged son, Jesus, the highest ranked High School basketball player in America, to sign with the Governor’s alma mater. At the moment, Jesus is weighing his options — to accept one of the scholarship offers before him, or take the more lucrative route of turning pro. With a deadline of only one week, Jake and Jesus must somehow reconcile their differences as they make their way towards a surprising turning point — and the understanding and respect they seek from each other. 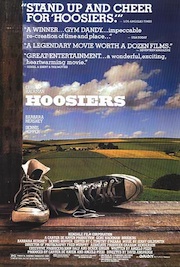 Failed college coach Norman Dale (Gene Hackman) gets a chance at redemption when he is hired to direct the basketball program at a high school in a tiny Indiana town. After a teacher (Barbara Hershey) persuades star player Jimmy Chitwood to quit and focus on his long-neglected studies, Dale struggles to develop a winning team in the face of community criticism for his temper and his unconventional choice of assistant coach: Shooter (Dennis Hopper), a notorious alcoholic.

Get these Best Basketball Movies from Amazon.com