After such an exhausting search for what seemed to be just the right person to play John McClane’s son in A Good Day to Die Hard 20th Century Fox has settled on Spartacus star Jai Courtney. Strangely Fox has decided to release this on Valentines Day 2013 instead of giving it a summer release, although with how strong Safe House just played this could end up being a huge payoff. I’m not so sure it mattered who they picked for this role, as everyone in the line-up looked incredibly similar (honestly is Jai Courtney’s real last name Hemsworth?). Recently Courtney was cast opposite Tom Cruise in the Lee Child’s adaptation One Shot, so this guy is sort of being groomed for action stardom. We haven’t seen many newcomers hold their ground with audiences though (Sam Worthington comes to mind) and I don’t see anything special about this guy that would change that. Check out the screen test photo of Jai Courtney with Bruce Willis below (I don’t see a strong family resemblance, but whatever) and let us know what you think. 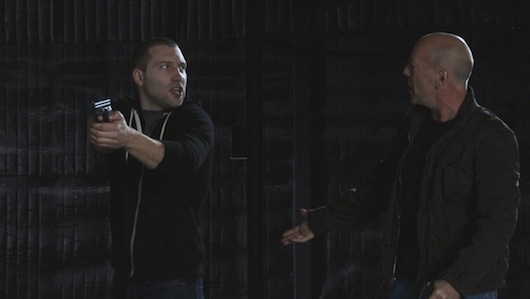