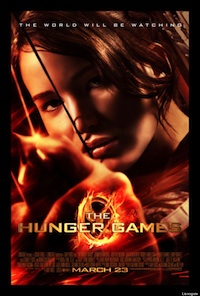 After Mission Impossible: Ghost Protocol and Underworld have shown surprisingly hefty IMAX grosses studios are eager to exploit the format (and higher ticket prices) on their own films. Audiences burnt out on 3D have seemingly turned to the large screen presentation as an alternative to the in your face distractions that seem to burden films today. Lionsgate studios has announced a limited one week engagement for The Hunger Games at IMAX locations across the country. The film opens March 23 2012. Studio head Joe Drake had this to say about the news.
“
“With this news, the release of The Hunger Games has truly become an epic event. The Hunger Games and IMAX are a match made in heaven — fans love this book because its world is so vividly imagined and seeing the film in IMAX will make them feel as if they have landed right in the middle of the action. It is the ideal way for fans to experience this film for the first time.”