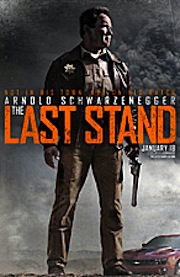 This may not be the greatest Schwarzenegger vehicle ever, but the man is back in The Last Stand! This trailer is just in time for The Expendables 2, which it will be featured on. Talk about pin pointing your perfect audience.

I can’t wait for the Arnold one-liners and just to get back to some basic action flicks makes me feel like going to the theaters more often. Seeing that name and knowing it’s not just a cameo feels right. Wish the guy never got into politics, imagine what movies we could have gotten. Also he wouldn’t have let himself go so much. Regardless I’m a Schwarzenegger fan (if you couldn’t tell) and definitely catching this one in theaters on January 18, 2013.

“
After leaving his LAPD narcotics post following a bungled operation that left him wracked with remorse and regret, Sheriff Ray Owens (Schwarzenegger) moved out of Los Angeles and settled into a life fighting what little crime takes place in sleepy border town Sommerton Junction. But that peaceful existence is shattered when Gabriel Cortez (Eduardo Noriega), the most notorious, wanted drug kingpin in the western hemisphere, makes a deadly yet spectacular escape from an FBI prisoner convoy. With the help of a fierce band of lawless mercenaries led by the icy Burrell (Peter Stormare), Cortez begins racing towards the US-Mexico border at 250 mph in a specially-outfitted Corvette ZR1 with a hostage in tow.