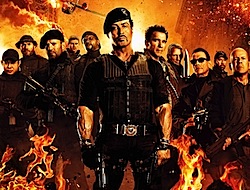 Box Office estimates for the August 17-19, 2012 weekend are coming in a little luke warm for The Expendables 2. I suppose we can still blame these numbers on the shaky turnout at theaters after the Aurora incident and now we had bomb threats this weekend. Estimated at only $28 million for the weekend that’s under both our predictions of $37 and $38 million and the originals opening weekend of $34.8 million. There’s a big chance this doesn’t go over $100 million domestic total. It is getting a CinemaScore of A-, but there’s something strange that happens with this movie that may erode the good word of mouth. People are making a lot of exceptions and excuses for this film having a bad or no plot saying that the explosions and fun more than make up for it. The majority of the reviews say that this second outing has all the same problems the first one did. I hope I’m wrong, but I don’t see this having that strong of a hold.

The Bourne Legacy looks to fall a tad more than 50% in its second weekend for $17 million. Better word of mouth probably could have had it in the 40%’s. This should ease up to around $100 million, not sure if its the hit Universal wanted.

ParaNorman had a Friday that was right in line with Coraline‘s. That film went on to make $16.8 million in its opening. As other kid movies moved to a summer release this pulled in a little low at $14 million. With a CinemaScore of B+ word of mouth should be warm but not hot.

Another B CinemaScore earner fell just 50% in its second weekend. The Campaign comes in at $13 million and like most comedies won’t make triple digits.

Sparkle, Whitney Houston’s last performance, earned $11.6 million which is both my $14 million prediction and Jason’s $13 million. A CinemaScore of A was unable to bring in any more of an audience.

Rounding out the new releases The Odd Life of Timothy Green made a surprising $10.8 million. That’s close to my $8 million prediction, but a stones throw from Jason’s $4 million. The film has already made $4.3 million since its Wednesday opening, a smart move to get out of the way of the other releases this weekend. It used to be a special release for big films to add a few more days to a weekend, but we’ve seen this happening more and more with smaller films to get outside of the weekend.

Hope Springs had a great hold of around 37% for a $9.1 million weekend. This is looking to prove to be a minor hit, much like The Best Exotic Marigold Hotel was earlier this year. Granted Hope Springs will spring past Marigold‘s $45.4 million total, but it did have a much larger release and more well known domestic stars.

Total Recall is just a little bit behind Underworld Awakening at this point. Recall has $51.7 million to Awakening‘s $54.3 million. I have always said these two would be comparable in the box office, not only because the talent is practically the same, but the film appeared to be a small Screen Gems type sic-fi actioner rather than a big Sony produced blockbuster. I like director Len Wiseman, and he’s proved he can make big budget flicks with the last Die Hard movie, but he’s got to break out of casting his wife, the beautiful Kate Beckinsale, in leading roles in his flicks. While I’m sure Paul WS Anderson is happy, he’s stuck in Screen Gems jail right now because of constantly casting his wife, the lovely Milla Jovovich, in everything he does. Or at least get someone bigger than Collin Farrell (I have nothing against Farrell, but he’s a dud at the box office) to headline.