For the past decade audiences have become increasingly aware that Jason Bourne is in essence an American James Bond type franchise. Now with the release of The Bourne Legacy the similarities between these two are too difficult to ignore. Bringing on a new actor to take over an existing franchise is what has kept the Bond films going for 50 years now. While Legacy trots out Jeremy Renner as our new super-agent with a foggy memory, Universal executives wait with great anticipation for those box-office numbers to start rolling. It reminded me of a similar situation faced by MGM 25 years ago this month when Timothy Dalton stepped into the tuxedo as James Bond in The Living Daylights. 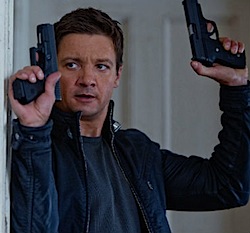 Jeremy Renner in The Bourne Legacy

I realize that Renner is not exactly Jason Bourne, he is Arron Cross, a different character in the same fictionalized world. Over the years many have attempted to work some of that Bond franchise magic on other spy films, the most notable comparison being the Mission: Impossible series. However all four of those films have featured the same actor (Tom Cruise) in the same role. As well, Cruise was already a superstar when he took on the role of Ethan Hunt. Back to Renner, sure he has become a star, thanks largely due to The Avengers, M:I-4 (coincidentally), and The Hurt Locker. Yet he doesn’t hold a sizable fan base and beside a few sequences in M:I-4 he is not a proven action hero. Many similar factors could be said of Timothy Dalton when he became the fourth actor to portray James Bond.

Let’s take a trip back to the weekend of July 31st-Aug 2nd 1987. The Living Daylights was released into theaters and easily beat The Lost Boys for the top spot on the box office chart. Opening with $11 million, which would equal about $0.00 million in today’s dollars, and with a per screen average of $13,100. The solid opening ranks as the third largest opening weekend of 1987, with an eventual gross of $0 when adjusted for inflation. This would eventually propel The Living Daylights in 19th spot on the top grossing films of 1987. It is clear to see why MGM gave Dalton another Bond vehicle, License to Kill before the series got tied up in legal rights hell for nearly seven years thereafter.

Early numbers have trickled in and it looks like Universal has dodged a bullet, The Bourne Legacy is on track to open between the low-mid $40 million range. Solidifying the brand and the strength of the character, though it may have a tough time reaching that eventual gross of $0.00 million of Daylights. Sound crazy? Not so much, this summer the average film opening above $40 million has had a 2.5x multiplier. That would put Legacy in the $90 million ballpark domestically, and let’s be honest with the foreign market growing so rapidly studios are looking to make 70% of their gross overseas. So even a somewhat disappointing US theatrical run can be off-set by the big numbers from abroad.

The interesting thing about this comparison is in the release date. Nearly 25 years to the weekend separates the two films. Although the summer is typically regarded as the yearly high-point of movie going, this release actually benefits Legacy over Daylights. All the Bourne films have been released in the summer months, the last being in August 2007. While Daylights and License to Kill were both summer rollouts, no Bond film since has been released outside the winter/holiday season. Apparently this has greatly benefited the series, as each subsequent installment has outgrossed the previous since 1995. A feat that I do not believe is possible for Legacy. Will the Bourne series continue for another decade? That remains to be seen, although if Legacy can crack $400 million worldwide, I believe Renner will be back as the lead. As for those much publicized rumors chronicling the supposed return of Matt Damon to the series, that is not so outlandish. Just remember that Sean Connery left the Bond franchise and returned, twice.