This is my list of the top five best Clint Eastwood movies you’ve never seen. Eastwood has been a proven draw at the box office since the late 1960s and continues to be one of the few action stars that has been able to transition from Oscar winning actor into an Oscar winning director. For a time period in the 1970’s Eastwood was considered to be the biggest box office draw in the world. Even today at age 82, Clint is headlining a new film, Trouble with the Curve. While most lists debate the man’s ‘great’ films, I have complied a list of Eastwood flicks you may have overlooked. In the course of a career spanning 45 years, Clint Eastwood has appeared in 46 films.

Close to the end of the American Civil War, injured Yankee soldier John McBurney is rescued from the verge of death by a twelve year old girl from an all-girl boarding school in Louisiana. At first the all-female staff and pupils are scared, but as John starts to recover, he charms them one by one and the sexually repressed atmosphere becomes filled with jealousy and deceit. A few of the girls go after him as well.

After rejecting the headmistress for a younger girl, McBurney gets his comeuppance in the form of some painful Freudian symbolism — he falls down the stairs. Eventually his leg is amputated by the headmistress, so as to avoid gangrene. After going on a rampage that scares all of the women, he reforms and announces his intention to marry one of the teachers, but it is too late; he has alienated the youngest girl, the one who first found him, by killing her pet turtle after throwing it aside in a drunken rage. In response, she is coached to pick mushrooms that the headmistress and girls use to poison him. 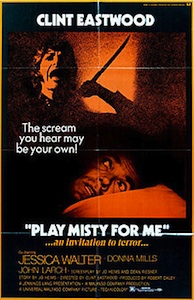 Play Misty for Me marked Clint Eastwood’s debut as a director, and it gave him the then-unusual opportunity to play a regular contemporary guy in a thriller about sex, obsession, and stalking. Eastwood’s Dave Garver is a self-centered California jazz disc jockey struggling with the idea of committing to his on-again, off-again girlfriend Tobie (Donna Mills). One night he meets the mini-skirted Evelyn (Jessica Walters) in a bar, and he goes home with her for what he assumes is a one-night stand. Dave discovers, however, that Evelyn has repeatedly called his show requesting that he “play ‘Misty’ for me,” and she is not about to go gently into the night now that she has bedded him. Even though it touches on the early-’70s flashpoints of sexual liberation, studio execs expressed doubts about why anyone would want to see a movie featuring Eastwood as a deejay. Eastwood reportedly answered that he was not sure either, but he thought it was a good suspense story, and he offered his services as director for free. Play Misty for Me wound up making five times more than it cost and is a precursor to such erotic thrillers as Fatal Attraction (1987) and Basic Instinct (1992). Eastwood mentor Don Siegel appears early on as a bartender. 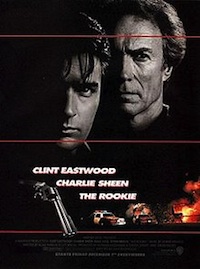 Inn return for Warner Bros. greenlighting his pet project White Hunter, Black Heart, Clint Eastwood directed and starred in this more commercial film, an action caper about a mismatched pair of auto theft cops. Eastwood is grizzled veteran detective Nick Pulovski, who’s determined to bring down the chop-shop operation being run by a pair of German crooks, Strom (Raul Julia) and Liesl (Sonia Braga). Although he’s been officially removed from the case and partnered with a green, recently promoted detective, David Ackerman (Charlie Sheen), the hard-drinking Nick’s not about to let the car thieves get away with murder. David, in the meanwhile, is dealing with his own issues, including the death of his brother (for which he was responsible), his unhappy girlfriend Sarah (Lara Flynn Boyle) and his estrangement from his wealthy father Eugene (Tom Skerritt). 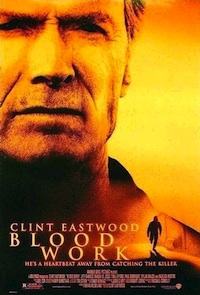 A retired detective must battle former colleagues and his own failing health in order to bring a murderer to justice in this action drama produced and directed by its star, Clint Eastwood. Terry McCaleb (Eastwood) was one of the best and most thorough detectives at the FBI’s Southern California office, until a massive heart attack sidelined him from police work for good. Following a heart transplant which saved his life, McCaleb has resigned himself to living quietly on a houseboat for the rest of his days, observing a strict health regimen prescribed by his cardiologist, Dr. Bonnie Fox (Anjelica Huston). However, McCaleb is persuaded to take on one last case through the insistence of a woman named Graciela Rivers (Wanda De Jesus). Rivers’s sister was murdered in cold blood by a mugger, and her heart was used for McCaleb’s transplant; now, Rivers wants McCaleb to find her sister’s killer. McCaleb agrees to take on the case, but he quickly discovers his weakened physical condition makes the rigors of handling an investigation far harder and more difficult than its ever been before; he also can no longer drive a car, and must persuade his oddball friend from the marina,Buddy Noone (Jeff Daniels), to ferry him around town. Before long, despite these drawbacks, McCaleb discovers evidence which suggests the murderer may be a serial who uses random street robberies as a cover, but he finds that Ronaldo Arrango (Paul Rodriguez) and John Waller (Dylan Walsh), the police detectives assigned to the case, are not especially interested in sharing the glory (or their legwork) with the former FBI point man. Blood Work was adapted from the novel by Michael Connelly; Brian Helgeland wrote the screenplay. 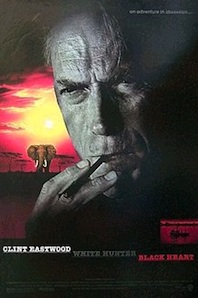 Something of a sleeper in its 1990 release, White Hunter, Black Heart is one of Clint Eastwood’s most engaging films. It is based on Peter Vietel’s novel about the location shoot of John Huston’s immortal The African Queen. But the focus is never on Bogie and Hepburn. Egomaniacal director John Wilson (Eastwood) is far more interested in killing an elephant than in making a movie. His old friend and scriptwriter Pete Verrill (Jeff Fahey) and his producer, Paul Landers (George Dzundza), are on hand to try and talk him down from this pursuit. Eastwood’s verbose, outlandish performance will be particularly remarkable to fans who tend to think of him as the soft-spoken tough guy.

If you should choose to buy these Top Clint Eastwood movies, try Amazon: