Ah the tournament movie, it has been awhile since I’ve seen you, but it looks as if you haven’t aged a bit. Sure you have better lighting and camerawork but the basic story fundamentals are still present This type of action film has been a staple in the martial arts genre since Enter the Dragon. Going on 30 years later nothing new has been add to the mix, so its up to the style of the direction and substance in the material at hand to elevate it above the field. The plot infuses elements of the aforementioned Enter the Dragon and Bloodsport, but it also borrows brazenly from contemporary blockbusters Gone in 60 Seconds and Rocky 3. So it is then a minor miracle that these recycled plot elements come together in the spirited and briskly paced Forced to Fight.

Gary Daniels is the Mel Gibson of fight films, ruggedly handsome with a charming accent and an onscreen presence that mixes physicality with vulnerability. Shane Slavin (Daniels) is a former champion in the underground fight circuit. After a successful MMA career he escaped the lifestyle with his brain intact and now spends his days working as an auto mechanic. Unfortunately his rebellious younger brother Scotty is consumed in this illegal fight club. After running afoul of the man running the events (Weller), the young fighter is nearly beaten to death and owes $64,000 dollars in retribution money. Shane realizes that his sibling is incapable of acquiring the funds to make good on his markers, so he decides to enter the circuit to clear the outstanding debt.

Peter Weller is a spark of scenery chewing magnetism as the mafia connected-unscrupulous fight promoter. The one-time Robocop, Weller, now looks like Nicolas Cage morphed into Robert Duvall; its quite startling initially. However, the man’s acting chops are still first rate even in a tournament fight picture with modest ambitions such as this. I am a fan of Martial Art pictures from Bruce Lee to Scott Adkins. Gary Daniels (Witness to a Kill, American Streetfighter) is one of the most underrated screen veterans of the modern B-Movie era. I am glad to see him involved with a project that gives us the excepted goodies but also has a little meat to the admittedly recycled storyline. Rarely in one of these types of movies do we see the main protagonist battling depression and bordering on domestic violence due to his rage from combat in the ring. I appreciate that the screenplay goes the extra step and involves the audience in something more than 90 minutes of round-robin style fighting. 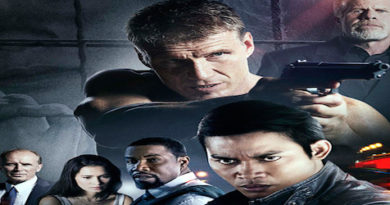