In college, I had a roommate who watched Bruce Lee movies with the sound turned off while blaring hip-hop music at the same time. Through a haze of bong smoke he had convinced himself that the music was timed perfectly to the on screen action and emotion. The Man with the Iron Fists is very similar to that long ago experience. This movie is like a fever dream in the sense that recognizable faces drift in and out of familiar scenes and places, yet we are never quite sure how they connect. There is a lot to keep up with in the opening act, which follows at least seven different characters over the course of four separate story threads. The problem is that neither debuting director RZA or his screenwriting collaborator Eli Roth have the confidence in their story to stick with one thread for very long. I continually thought that right when things were heating up, they kept cutting back to a less interesting thread, thus restarting the frustrating process.

The population of a Jungle Village must defend themselves from a treacherous sibling duo bent on stealing gold from the Chinese Empire. A local blacksmith (RZA) forges the weapons that aid in their battle, until he is dismembered by a ruthless group of outlaws. The meager worker creates two cast iron fists as prosthetics, they also happen to make the lowly blacksmith into a nearly indomitable force. Russell Crowe, who appears to have drifted in off the set of The Quick and the Dead, plays a English gunslinger and Lucy Liu stars as the madame of a fine brothel in Jungle Village. This period action thriller features great supporting work from this aforementioned but also Byron Mann as Silver Lion, Rick Yune playing the returning prince Zen Yi, The X-Blade and the beautiful Jamie Chung.

Undoubtedly well-casted, The Man with the Iron Fists provides just enough thrills, camp and martial arts fury to rank high on the guilty pleasure barometer. If you can make it past the opening 40 minutes, you will be rewarded with some of the finest pure kung-fu glory not seen on the big screen since the days of the Shaw Bros. This is not your parents Crouching Tiger, Hidden Dragon, laced with extreme violence and a mischievous sense of loving homage, TMWTIF cuts deep. 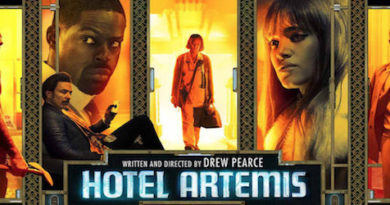