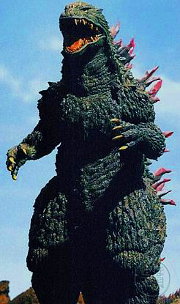 CHUD has reported that through a source that has heard a Warner Bros webinar for their advertisers that the Godzilla reboot will feature two new monsters. They’re also saying that the story follows a soldier but is way different from the Toho Godzilla films.

Currently Frank Darabont is taking a crack at the script, which means this could change, but that’s doubtful. Chances are we’ll be seeing Godzilla tear up the landscape against two other monsters. Exciting? I think so. I was excited back when David S Goyer was working on the script/story.

I like Darabont, and the only thing that gets me a little nervous is his misstep with the horrible ending on The Mist. Regardless this is good news and means this will be a true big budget version of Godzilla, as long as Taylor Kitsch isn’t cast we’ll be ok.