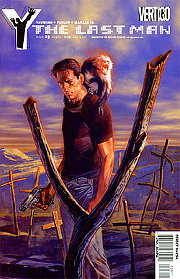 Y the Last Man is going ahead at New Line with Dan Trachtenberg set to direct. Trachtenberg is a commercial (as is advertisements) director best known for a recent short film based on the video game Portal. While I liked the look and feel of the short, it is in no way a complete story with similarities to that of a commercial ad. I’m not sure if Trachtenberg can handle a feature film, and I tend to dislike filmmakers that have an atmosphere over story style.

Y the Last Man is in my favorite genre – the post-apocalyptic genre. The story centers around the last surviving man and his male monkey companion after all other male mammals were killed by a plague targeting animals with a Y chromosome.

If you’re not one of the millions that has viewed Trachtenberg’s short, you can do so below. I’m not sure that everyone that makes a short that hits millions of views on YouTube deserves to helm a film, but so far Hollywood has been impressed and we’ve seen quite a few people getting their foot in the door this way. What do you think?