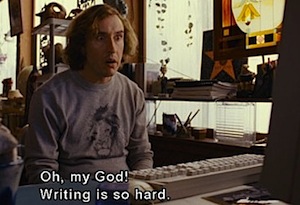 I’ve decided to write a movie. Well, make a movie, but first you need a script, thus write a movie. I’ve written at least one movie before, that is if you combine all my unfinished scripts into one. I enjoy writing and creating, but I get bored and sidetracked easily. A writing session for me is exactly like a session for Steve Coogan’s character in Hamlet 2. Your mind turns to other things, and if you’ve got an Internet connection handy you’re writing day is shot. So to combat this I’m keeping myself in line with blog posts about my progress. Kind of a journal to keep me honest. Plus I’ve got a really great idea (I think), and I’d love to see something come to fruition, even if just this once.

Whilst working away programming effect plugins for video editing and compositing software I accidentally stumbled across an effect that makes people look ugly. Pushing to extremes they no longer looked real and more cartoony, but pulling back a bit this thing made Megan Fox look like a man in drag. And an ugly man at that. It was a neat effect, but useless really. Not at all what I was attempting to create. But wait! My mind began to wonder, as it easily does, and somehow somewhere deep in the boredom this idea came to me. What kind of movie could you make with this effect? Would it be too weird or could it be interesting enough to pursue?

Some of my favorite movies are science fiction flicks. These films often push the envelope on believability and special effects. Combine that with audiences’ growing acceptance of comic book movies (which let’s face it, are pretty ridiculous when you step back and look at them) and suddenly a movie utilizing this effect doesn’t seem so far fetched. I also like how science fiction is often a commentary on modern society, it’s a genre built for 5 year olds who love robots, 70 year old grey haired philosophers and everyone in-between.

Do you remember that episode of The Twilight Zone – The Eye of the Beholder – where everyone is pig faced except a few (hey buddy, spoiler much?). Let’s take that idea and add a little more to it. Let’s say that perceived beauty is really perceived. Such that everyone is physically the same as they were before, except our brains can no longer interpret faces correctly. And it happens worldwide, over night. What would that world be like?

That’s the basis for my movie, Distortion. I was able to create an entire world based on this idea, not all of that is in the following treatment, but there’s a lot of technology that goes hand in hand with how we’d adapt to this issue. It relates directly to our society as it stands now as well. Honestly when people feel the need to photoshop Jessica Alba or Kate Beckinsale, that’s a pretty twisted reality already. Future blog posts will explore this world more deeply, but for now getting a simple treatment out of my head starts us on our journey.

In the near future a new virus has infected all of mankind. This virus doesn’t kill, nor zombify its victims. It attacks the brain in a non-lethal fashion, crippling the infected’s ability to see faces clearly. Loved ones no longer recognize each other under the hideous masks their brains set upon one another. In this world everyone is ugly, and no one is who they appear to be. Less than 1% of the population are immune to the disease. There is no cure.

The following decade in the aftermath of the virus resulted in mass world panic as governments and cities collapsed. There were those though, that sought to return order, and now after 18 years since the virus’ first appearance, a new government has formed in the former state of California. This was in no small part due to The Enforcers, a group organized to police and protect. The past 8 years hasn’t been kind to them, as the new government looks to shift blame onto them for force used to re-establish order. But this new government isn’t without problems. In order to maintain its grasp on power it has become corrupt, making good with bad elements to keep them in check. Gangs still rule most of the land, even as the transition from The Enforcers to a civilian police force comes to an end.

Jessica Clements works for a representative in the new government body. His hard line political views are hated amongst the criminal element. Jessica witnesses his death at the hands of a group run by another representative and mob boss Ryan Grates. In this world witnesses are useless, except Jessica is one of the 1%. Unaffected by the virus she could take the stand against Grates as one of the last true eye-witnesses.

Robert Walker is a dying breed. Once a part of the elite Enforcers, now he must try to come to grips with his life in this new strange world. Not after one last assignment though. Fearing the widespread corruption the Police Chief has entrusted Jessica in Robert’s stead, to make sure she reaches her destination and is able to testify against Grates. Now he must protect one last life, to be certain the future will be brighter than the past. But with such heavy decisions to risk the person he’s falling for, will Robert be capable of making the hard choice and sacrifice to ensure the safety for all versus the one?

8 thoughts on “Writer’s Journey: The Treatment”