Dolph Lundgren returns to the screen as the aggressively named Max Gatling in this nifty biological action thriller that is essentially Dolph vs. the dead. Acting as a low-rent World War Z type outbreak tale, the events are set in Southeast Asia where medical regulations are lax and biotech companies can get away with unsanctioned experiments. Naturally, one of these viruses becomes airborne and the entire city is quarantined regardless of infection status.

Mercenary Max Gatling is hired by a wealthy business man to go into the hot-zone and retrieve his stranded daughter; Judy. Once behind the quarantine lines, Gatling finds himself caught in the midst of this deadly outbreak and is forced to usher a small band of intrepid survivors out of harm’s way. The problem is that marauding gangs of the zombified are in hot pursuit of the uninfected. Leading to many violent skirmishes between the running scared and the walking dead.

Battle of the Damned may seem like it was adapted from the pages of a graphic novel, but in actuality it is an original screenplay from director Christopher Hatton. I use the term ‘original’ loosely since the storyline is assembled from bit parts of Escape from New York, I am Legend and even Van Damme’s Cyborg. However, there is still lot of energetic fun to be had here, not least of which is witnessing Lundgren gouge eyes, slit throats and bury his hatchet in the skulls of the undead. The special effects are adequate for this production level, with surprising detail paid to the robot hunter/killers.

Lundgren sports a tooth pick in the corner of his mouth that recalls Eastwood’s ‘Man with no Name’ or Stallone’s Marion ‘Cobra’ Cobretti depending on which era you prefer your action hero reference. The futuristic mercenary wardrobe Dolph adorns throughout looks as if it were recovered from the reaching depths of Mickey Rourke’s closet. Think of it as Road Warrior kitsch. Assuming you can stomach the high level of violence, and the redundancy of characters evading zombies, then you may appreciate Christopher Hatton’s go-for-the-jugular direction, which lends the film considerable zest. 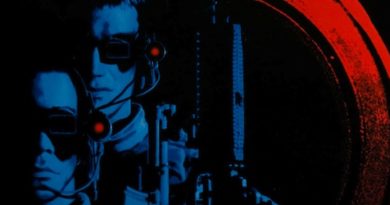